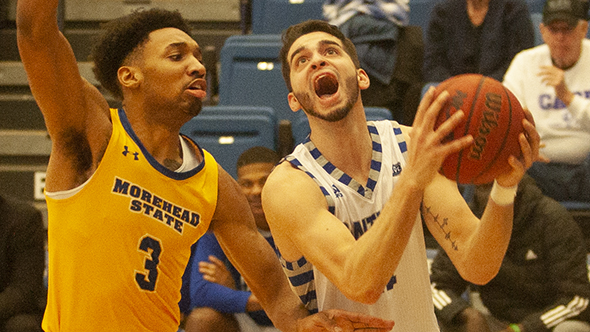 Eastern guard Josiah Wallace drives around a Morehead State defender on Feb. 8 in Lantz Arena. Wallace had 25 points in a 71-65 win.

Only two Eastern players appeared on the scoring leaderboard in the OVC last season for the men’s basketball team, and the Panthers’ leading rebounder was not in the top five in the conference.

But this season, Eastern’s players are appearing on the OVC leaderboards more than last year, and with relatively better statistics.

While appearing on the conference leaderboard is nice in its own right, the numbers that Eastern’s players are putting up are more significant to Eastern than the prestige of being among the best in the conference.

Eastern’s offense is more well-rounded than it was last season, and if we have not said his name enough and sang his praises enough, George Dixon is a big factor in that.

His ability to score in the post and pass from down low have given the Panthers another level of potency to its offense that it needed last year.

Dixon is Eastern’s third-leading scorer (11.7 points per game), which puts him at 20th in the OVC. Last season, only Mack Smith and Josiah Wallace were on the scoring leaderboard, and they are again this year: Smith is 16th (12.8 ppg) and Wallace is ninth (14.1 ppg).

Although he does not appear on the OVC leaderboard, Marvin Johnson rounds out Eastern’s leading scorers with his average of 9.5 ppg.

The Panthers have a well-balanced scoring attack that is much improved since last season, and the numbers they are putting up is a testament to that

Once again, Dixon stands out for Eastern in the rebounding category.

He leads Eastern with 8.8 rebounds per game, which is second in the OVC. At one point, early in the season, Dixon averaged a double-double and nearly is still.

But even going beyond the OVC, Dixon’s rebounding ability on the offensive glass is among the best in the nation: He is 20th in Division I basketball with 3.67 offensive rebounds per game.

Rebounds give Eastern more chances and time of possession, and Dixon’s rebounding, especially on the offensive glass, have given the Panthers more scoring chances.

At one point last season, Eastern was 12-0 when it outrebounded its opponents. Eastern head coach Jay Spoonhour said, about that record, that the rebounding was nice and helpful, but just outrebounding opponents did not necessarily equal wins.

Coincidentally, up to that point, Eastern had lost every game where it was outrebounded.

Even with the loss of Deang Deang to injury in December, Eastern can still be tight defensively and give opponents trouble.

And as the rest of Eastern’s roster has stepped up to fill the hole Deang left, a few of the Panthers players have put themselves on the OVC leaderboards.

Dixon also appears on the OVC leaderboard for blocks, as do JaQualis Matlock and Jordan Skipper-Brown.

Last season, Aboubacar Diallo was the only Eastern player to appear on the list, but with Eastern’s buffed defense this season, more Eastern players are getting involved with protecting the lane.

Eastern has been a better team this season than last (despite some shortcomings), and it is showing on the OVC leaderboards.