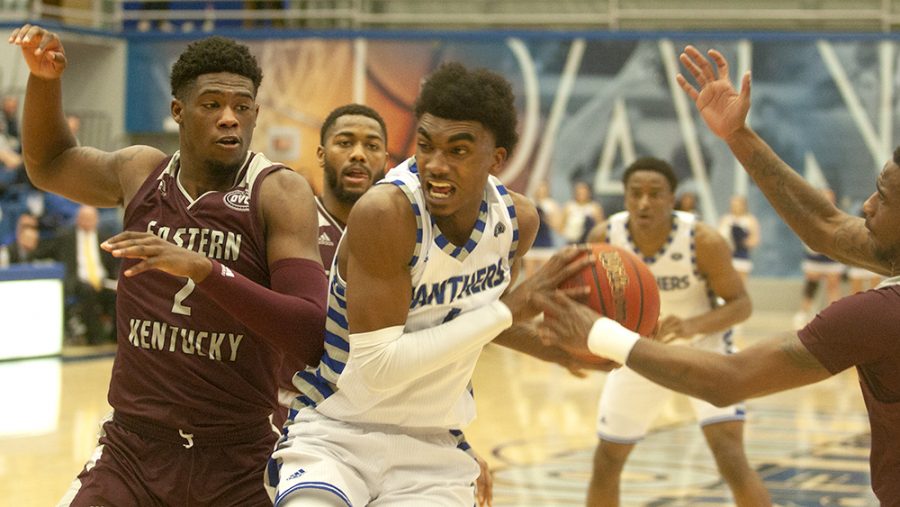 Eastern’s Marvin Johnson drives through two Eastern Kentucky defender in the Panthers’ 91-84 loss to the Colonels Thursday night in Lantz Arena. The Panthers are now just 4-7 in OVC play.

After falling by four points or less against the top two OVC teams on the road, Eastern’s men’s basketball team followed those performances up with a 91-84 loss to Eastern Kentucky Thursday.

The Colonels (12-12, 9-2 OVC) are the third-place team in the OVC and showed why Thursday, as their defense and ability to score gave Eastern (11-12, 4-7 OVC) a demoralizing third-straight loss.

Eastern showed good signs against Murray State and Austin Peay last week, despite the close losses, but against Eastern Kentucky Thursday, the Panthers looked flat during big chunks of the game.

The Panthers started the game flat and were slow for most of the second half.

“I would say they just didn’t go in,” Marvin Johnson said. “That goes back to got to just make shots and finish.”

Eastern Kentucky, however, shot three-pointers well and tore Eastern up inside.

The Colonels beat Eastern defenders off their first step on the perimeter and got to the lane, either finishing the drive or dumping a pass to someone else who converted the basket.

Josiah Wallace finished the game as Eastern’s leading scorer, and the highest scorer between both teams, with 25 points.

Kashawn Charles, Jordan Skipper-Brown and Johnson each scored in double-figures to give Eastern a boost.

Eastern Kentucky got significant help from its players not named Jomaru Brown (their leading scorer) as he only scored 13 points on 5-of-17 shooting.

“Tre King did a great job posting up,” Eastern head coach Jay Spoonhour said. “They have got a nice team. And Moreno is a good player and played really great tonight.”

Eastern came out slow in the second half, and considering how Eastern started the game, the Panthers did well to escape the first half with a 38-37 lead.

Eastern Kentucky came out with a tough press on Eastern full-court inbound plays, and in Eastern’s half-court offense, the Colonels trapped Eastern’s ball handlers beyond the three-point arc.

The Colonels were led by Russha Cruickshank, who averages 6.2 points per game and is the sixth-leading scorer for the Colonels.

Mack Smith was tasked with guarding Cruickshank for much of the first half and struggled, which is out of character for Smith, as he has been a good defender all season.

One of the moments that epitomized Mack Smith’s frustration, and Eastern’s overall in the first half, was when Cruickshank hit a wing three-pointer over Smith with 8:58 left in the first half, and Smith shook his head at himself.

The other moment was when Spoonhour, who was frustrated throughout the first half, received a warning for yelling at the referees with 2:03 left in the first half, after Shareef Smith was called for a foul that Eastern disagreed with.

But Mack Smith, despite some of his struggles on the defensive end, helped keep Eastern in the game when Eastern Kentucky was leading throughout the first half.

Smith hit three three-pointers in the first half, which extended his streak of consecutive games with a made three-pointer to 72 and helped Eastern stay close to the Colonels during times when the Panthers struggled.

The deflating feeling of the loss, which was Eastern’s first home loss this season, can be summed up well by what Spoonhour said after the game, which is that you are typically supposed to win games where you score 84 points.