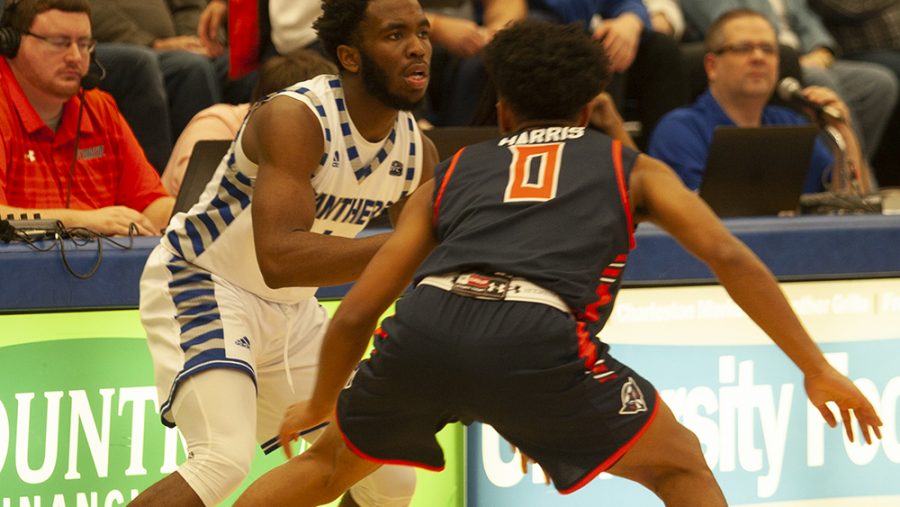 JJ Bullock | The Daily Eastern News Kashawn Charles maintains his dribble as he is guarded on the wing during Eastern’s 95-83 victory over Tennessee-Martin Jan. 23 in Lantz Arena. The Panthers host third-place Eastern Kentucky Thursday in Lantz Arena.

It’s perfect timing for the Eastern men’s basketball team to be back at Lantz Arena Thursday, hosting Eastern Kentucky, for a multitude of reasons.

Being on the road has not been fun for the Panthers. They’re 3-10 on the road overall and 0-6 in OVC road games after their latest defeat against Austin Peay Saturday.

One of those road losses happens to be from Eastern Kentucky on Jan. 9, dropping the contest 77-74.

“Our first half was bad; we started the game bad; we came out flat, a lot of turnovers. That’s what got us in the first half,” Josiah Wallace said based on their last performance against the Colonels. “Eight of our 11 turnovers were in the first half; they’re a high-pressure team, a full court press game. I don’t think it caught us off guard. I think we were lackadaisical with the ball.”

On the bright side, though, Eastern begins a three-game homestand against Eastern Kentucky at 7:30 p.m. It will be a game where Eastern will be put to work as the Colonels are 8-2 in OVC play, which has them No. 3 in the conference.

However, the Colonels are 11-12 overall.

The Panthers remain unbeaten at Lantz Arena at 7-0, which could help Eastern snap a two-game losing streak. As part of that 7-0 home record, the Panthers topped four conference opponents.

A huge factor for Eastern coming in is the improvement on free throw shooting. In two of the last three games, the Panthers have shot under 50 percent.

Junior Mack Smith comes into the game as part of the 1,000-point club and is riding a streak of 71 straight games with making at least one 3-pointer.

Another big presence will be junior George Dixon, who has grabbed double-digit rebounds in three straight games, which has him second in the OVC, averaging just over nine per game.

Dixon also posted his eighth double-double of the season Jan. 30 against Murray State.

“We shared the ball really well this past week,” Wallace said. “It really mostly helps us with our defense in transitions and doing stuff like that. It helps a lot. We like to play fast and whenever you able to get rebounds and stops and get steals … it helps.”

These upcoming games will be crucial for the Panthers. If they defeat Eastern Kentucky, that could move them into a tie for sixth place, depending on if Morehead State loses to Southern Illinois Edwardsville Thursday. Then, on Saturday, Eastern gets to face Morehead State.

The homestand will wrap up with Southern Illinois Edwardsville next Thursday, which is also a great chance to win because the Cougars are 2-8 in the OVC and 5-18 overall.

If the scenario plays in favor of Eastern, the standings could look a little different in the coming weeks.