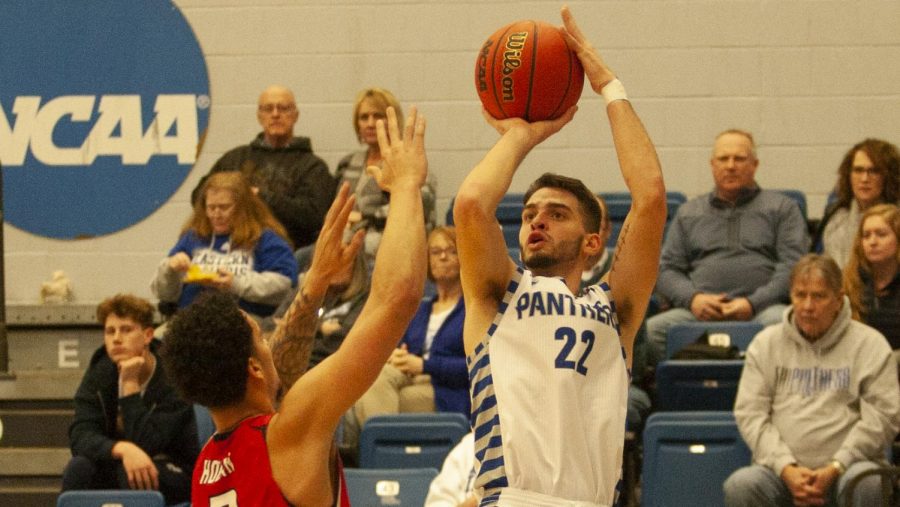 Eastern guard Josiah Wallace shoots a jumper from the baseline against Southeast Missouri Jan. 25 in Lantz Arena. Wallace scored 11 points and the Panthers won the game 61-59.

Eastern’s men’s basketball team nearly flipped the script from a year ago against Murray State Thursday, but fell just short.

The Panthers lost 73-70 to undefeated Murray State on the road Thursday night, but the Panthers put up a fight that made the game as close as the final score turned out to be.

Last season, when Eastern visited Murray State, Eastern held a seven-point lead in the second half, but Murray State made a 22-4 run to end the game and win.

Thursday, though, Eastern took its turn to make a big comeback (nearly, at least).

Eastern trailed by 16 points midway through the second half, but shortly after, in a 48-second span, the Panthers made a 9-0 run, led by JaQualis Matlock who scored five points in that run.

After the run, the Panthers trailed 56-51 with momentum on their side.

“We kept our composure well when we fell behind,” Eastern head coach Jay Spoonhour said. “We continued to guard and made some plays on the defensive end.”

Josiah Wallace was the key in Eastern’s second-half comeback, as after scoring just four points in the first half, he scored 20 in the second half, leading Eastern for the game with 24.

In fact, Wallace was incredible, taking over the game and keeping Eastern in it to the final horn.

In the last 30 seconds of the game, Wallace made back-to-back tough mid-range shots to pull Eastern back to within a one possession game, as the Racers kept pushing the score back to five with made free throws.

The Panthers had a chance to tie the game and go into overtime with 10 seconds left, but Mack Smith and Wallace each missed a three-point attempt and Murray State escaped the upset.

Offensive rebounds were a big part of Eastern’s success in the contest, as the Panthers grabbed 22 offensive rebounds. Overall, Eastern held a huge advantage over Murray State in rebounding, 44-28.

“I thought all of our big guys did a great job of concentrating defensively and moving their feet,” Spoonhour said. “A lot of the offensive rebounds came from just being real active and chasing after it.”

George Dixon led Eastern in rebounding, with 15 (eight offensive), while scoring 10 points for a double-double.

“Murray (State) throws the ball to their inside guys as much as anyone you’ll see,” Spoonhour said. “It was hard, physical game for JaQualis, George and (Jordan Skipper-Brown), and I thought they really did well.”

Mack Smith also had 10 points in the game, rounding out the three double-digit Eastern scorers.

Murray State also had three double-digit scorers, led by Tevin Brown, who tied Wallace for the game-high with 24 points.

Brown is the fourth-leading scorer in the OVC, coming into Thursday’s game. Brown missed two free throws with 18 seconds left, leaving the score at 73-70, which gave Mack Smith and Wallace their three-point opportunities.

Eastern kept up with the Racers in the first half, even holding a lead for approximately half of the first period of play.

After that, the Panthers used a well-balanced attack to put the pressure on the Racers during the first half.

Eastern also held the rebound advantage over Murray State in the first half, led by Dixon, who had seven rebounds, along with four points.

The difference in the first half, which helped Murray State take a 32-27 lead into halftime, was Brown.

Despite nearly pulling off the upset, Eastern’s weekend will not get any easier, as the Panthers stay on the road to face Austin Peay, who is also undefeated and is tied for first place in the OVC with Murray State.