Column: Panthers’ schedule could help them 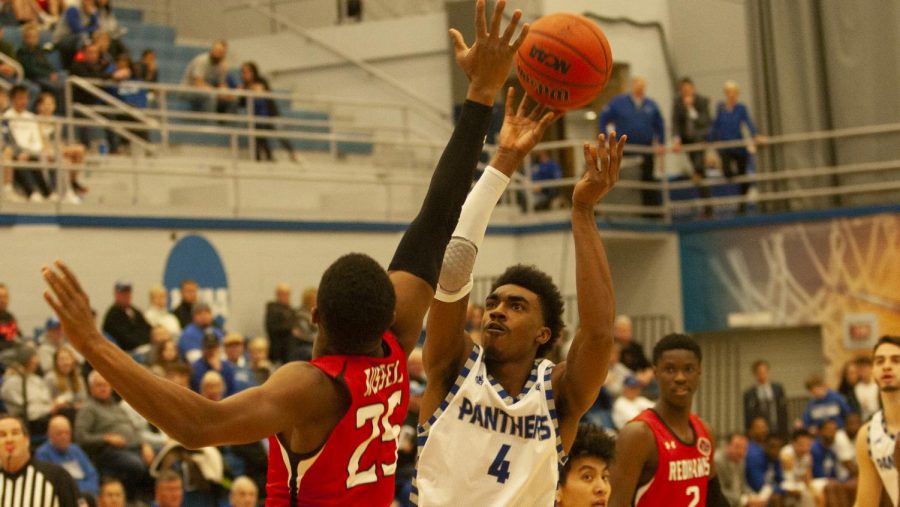 Eastern guard Marvin Johnson rises up over a defender to attempt a shot against Southeast Missouri Jan. 25 in Lantz Arena. The Panthers won the game 61-59.

After the Eastern men’s basketball team defeated Tennessee-Martin 95-83 Jan. 23, head coach Jay Spoonhour made sure to let everyone in the press conference know that the Skyhawks were a good team.

“I think it’s your schedule as much as anything,” he said. “Your schedule and who you play and where you play is such a big deal… that’s (Tennessee-Martin) a better team than a 1-6 team, but, you know, the schedule they’ve had, a lot of people would look about like that.”

Tennessee-Martin was 1-5 going into the game, and after the loss to Eastern and a win over Southern Illinois Edwardsville, the Skyhawks are still just 2-6.

But as Spoonhour pointed out to everyone, that the Skyhawks’ already had a tough schedule, Eastern itself finds itself in a similar situation and could benefit from its schedule down the stretch.

The Panthers opened conference play on a four-game road stretch, where they lost all four games.

All four teams Eastern lost to are conference tournament contenders as of right now, and three of them are in the top five in the conference (Eastern Kentucky is third, Belmont is fourth and Tennessee State is tied for fifth with Eastern and Jacksonville State). Morehead State, even with a losing record, is eighth right behind the teams tied for fifth.

The difference between Eastern’s and the Skyhawks’ schedule is that Tennessee-Martin already faced the top two teams in the conference (Austin Peay and Murray State) twice, and Eastern has yet to face those teams.

That is where this week comes into play.

This week is likely the toughest stretch of games Eastern has this season.

Obviously, the Panthers are the underdogs in both games, but if the Panthers managed to upset either team, it would greatly help them.

If Eastern does lose both games this week, it could find itself out of the top eight in the conference, depending on how its neighbors in the standings do.

What will help Eastern is that, after this week, the Panthers have five of their last eight games at home.

Eastern’s final home games are against Austin Peay and Murray State, and although Eastern may look like the underdog now, the Panthers did defeat Austin Peay at home last season.

What is really favorable for the Panthers, though, is that its three home games after this week are against Tennessee-Martin (who Eastern defeated), Southeast Missouri (who Eastern also defeated) and Southern Illinois Edwardsville (season finale).

So, looking at this week’s games and the rest of the schedule, Eastern could very likely close out the last 10 games with a 6-4 record, thus finishing with a 10-8 overall conference record.

That assumes that Eastern loses both games this week, but defeats either Murray State or Austin Peay at home later, wins all three games of the three straight home games after this week, loses to Tennessee-Martin on the road later and then closes out the season with road wins against Southeast Missouri and Southern Illinois Edwardsville.

Defeating Murray State or Austin Peay, even at home, will be a tough task, and who knows, the Panthers could win more or fewer games than what I laid out here.

But this is a pretty good estimate for Eastern’s future.

Although Eastern should have won a game or two during the conference-opening stretch, it did the best it could and weathered the storm, as Tennessee-Martin did.

The conference season has not reached its halfway point quite yet, but it is clear, like Spoonhour said, the schedule is a big part of how Eastern and other teams finish in the conference standings at the end of February.