Eastern track, field will compete among 11 teams at Illinois Invite 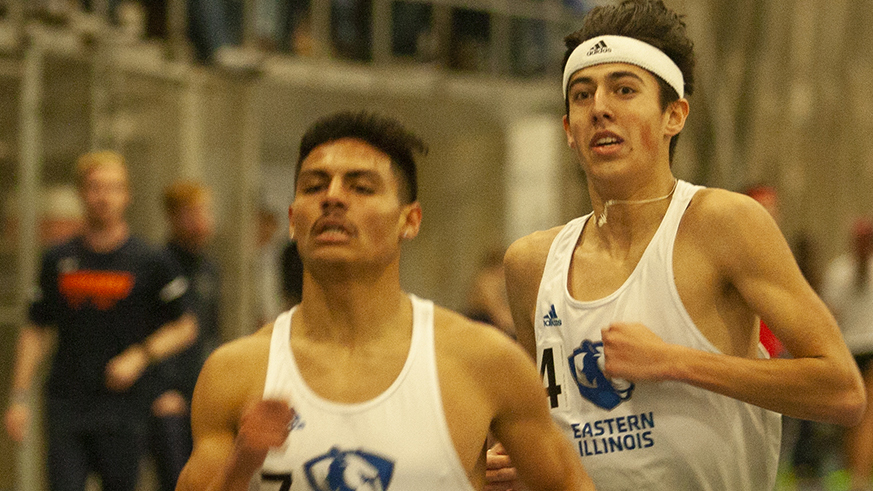 Karina Delgado | The Daily Eastern News Jeremy Bekkouche (left) and Marcus Skinner (right) run next to each other during the men’s 1 mile run during the EIU John Craft Invite Jan. 18 in the Lantz Fieldhouse.

The Eastern men’s and women’s track and field teams return to action on Friday at the Illinois Invite.

The first day (Friday) begins at 2 p.m. with the heptathlon and pentathlon, and the second day (Saturday)  begins at 9 a.m. with the field events before running events start at 11:40 a.m.

Redshirt sophomore Dustin Hatfield is coming off a strong performance after winning Ohio Valley Conference Male Track Athlete of the Week, after posting a time of 4 minutes, 14.44 seconds, which leads the conference, in the one-mile run at the EIU John Craft Invite this past weekend.

Hatfield’s time, when converted for track size, comes out to 4:11.24, which is the best time in the OVC.

Both the men’s and women’s teams placed first out of 15 teams at the invitational with both teams having seven first-place finishes each.

The honor marks the first Eastern track and field athlete to win the award during the indoor season, but he will not be the only OVC Track Athlete of the Week at the invitational. Southern Illinois Edwardsville junior Joseph Stone received the award after setting the conference pace in the 800-meters at 1:55.18.

Hatfield’s time earned him first at the event at Lantz Fieldhouse last weekend with junior Jeremy Bekkouche taking third with a time of 4:20.66.

The best time in the OVC for the one-mile for women’s track also belongs to an Eastern athlete, as senior Grace Rowan’s 4:58.28 time at the John Craft Invite claims the top spot.

Two other conference top times were recorded last weekend, as freshman Ricky Johnson owns the top time of 22.04 seconds, after a track distance adjustment, in the 200-meters, and sophomore Jekeel Suber ranks first in the 60-meter hurdles at 8.19 seconds.

On the women’s side of the 60-meter hurdles, Shanisa Stinson placed first at the John Craft Invite, with a time of 8.97 seconds. Fellow Panther runner Akiya Kollore finished right behind Stinson for second place, crossing the line with a time of 9.30.

Senior Lindsey Carlson, who was also a four-year starting defender for the Eastern women’s soccer team, had a ceremonious beginning to her indoor track career, winning the 3000-meter, her first ever race, with a time of 10:05.32, good for second in the OVC.

Both the men’s and women’s distance medley relays started off the indoor season with wins and OVC best times, as the men’s squad finished with a 10:29.74 time while the women clocked in at 12:34.09.

After this weekend, both teams compete next at the Iowa Black and Gold Premier beginning on Jan. 31.