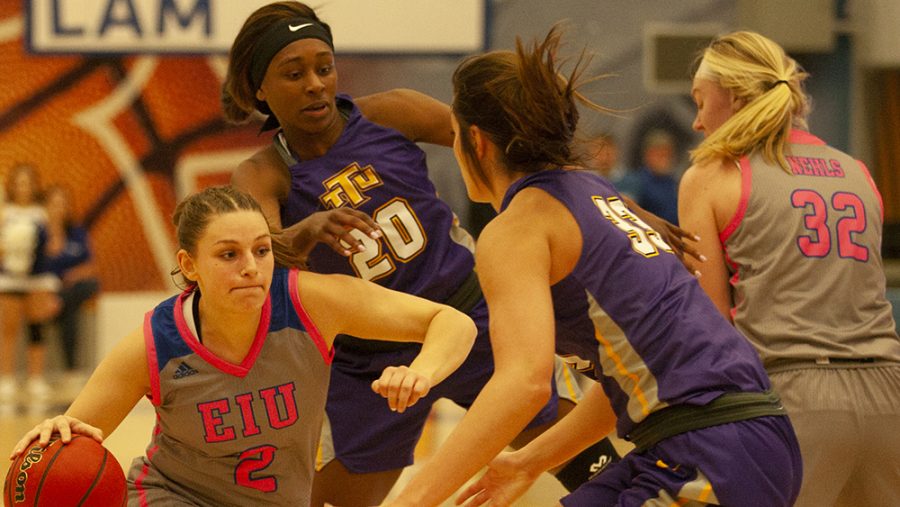 Karina Delgado | The Daily Eastern News Jordyn Hughes tries to drive past a defender as Jennifer Nehls sets a screen for her. Eastern lost 75-62 to Tennessee Tech Jan. 18 in Lantz Arena.

As luck would have it, the Eastern women’s basketball team’s schedule this week will show it no leniency following the Panthers’ (4-2 OVC) second conference loss of the season to first-place Tennessee Tech (6-0 OVC) Jan. 18.

The Panthers, having just played arguably the best team in the conference in Tennessee Tech, will host the team that could be argued to be better than Tennessee Tech in Tennessee-Martin (6-0 OVC) Thursday in Lantz Arena.

After their dates with consecutive undefeated teams, the Panthers will then be tasked with hosting Southeast Missouri (4-2 OVC) and its top-ranked offense Saturday.

If that sounds like a lot, that is because it is … this stretch of games will likely be the Panthers’ toughest of the season, which means there will be a lot to learn about Eastern this week.

A lot of the Panthers’ early conference games this season have been about just that: Learning who the 2019-2020 Panthers are and where they stand in the OVC. Eastern started conference play 3-1, beating the lowly Tennessee State and Eastern Kentucky, which did not really tell us a lot.

But it was Eastern’s next two wins over Morehead State and Jacksonville State that indicate Eastern is no longer looking to be a bottom-half OVC team.

Those wins showed Eastern is finally ready to compete in the conference.

But what was really interesting is that Eastern was in that game until the fourth quarter and played Tennessee Tech a lot closer than the 75-62 final score indicated.

That is what makes the Tennessee-Martin and Southeast Missouri matchups intriguing.

Yes, Tennessee-Martin is another undefeated OVC team, but it has not quite played to the level Tennessee Tech has this season.

The Skyhawks rank fourth in offense, but just eighth in defense.

The Panthers fare only a little worse in offense than the Skyhawks, scoring just three less points per game, but fare far better in defense, allowing seven points less per game.

Tennessee-Martin could be a very winnable game for the Panthers.

Southeast Missouri is a similar matchup, but it will pit the Redhawks’ top offense against the Panthers’ second-ranked defense.

The Skyhawks and Redhawks also bring three of the conference’s top-five scorers into Lantz Arena.

These three games against Tennessee Tech, which resulted in a loss, Tennessee-Martin and Southeast Missouri do nothing but provide test after test for this Panthers’ team trying to find its place in a crowded OVC.

Eastern tips off against Tennessee-Martin Thursday at 5:15 p.m. in Lantz Arena and Southeast Missouri at 1 p.m. Saturday.