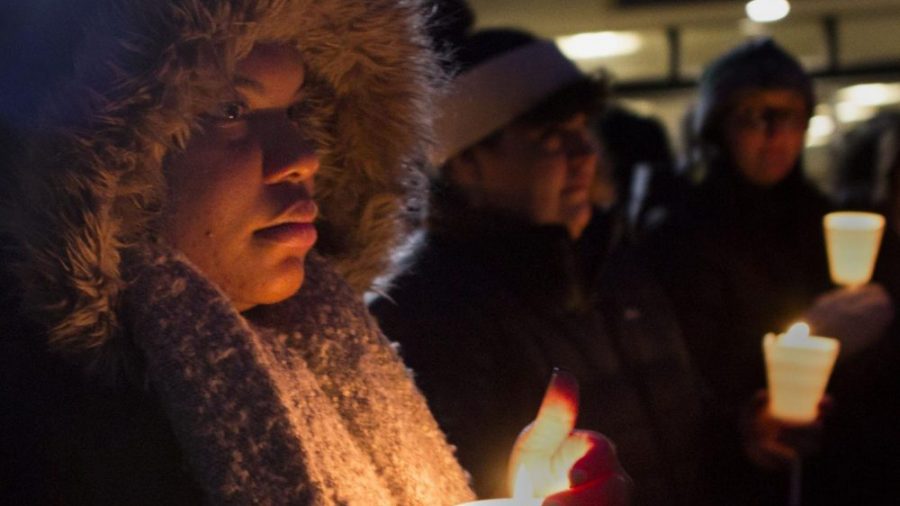 The Zeta Nu Chapter of Alpha Phi Alpha Fraternity, Inc. hosted a candlelight vigil and celebration presentation following the Day of Service through the Office of Civil Engagement and Volunteerism.

Crystal Brown, assistant director of the Office of Civic Engagement and Volunteerism, said she was happy with the turnout for the service projects.

“I’m really impressed, we had over 200 students today, so this is amazing for only being back one week,” Brown said.

Brown said she saw value in celebrating King Jr. by giving back to the community.

“I think that is important for students to understand the legacy of Dr. Martin Luther King Jr. and take action with that and come out and see how easy it is to make a difference in other people’s lives,” Brown said.

Ireland Binkowski, a sophomore science education major, attended the service day on her own because of her love for volunteer work.

“I always like doing community service, especially stuff like this because it goes through the community and stuff, and I mean making dog toys and origami crafts are pretty fun,” Binkowski said. “My group started with the origami heart crafts that we are going to send to the nursing homes in Charleston or Mattoon.”

Claire Bunse, a sophomore marketing major, is the service chair for Alpha Sigma Alpha and said she went to the service day because she also loves volunteering.

“It’s always good for the community and there isn’t enough of service,” Bunse said. “It’s a good thing to invite your friends to because we can all just hang out and then do something that’ll help the community beyond ourselves in a day full of fun honoring Martin Luther King Jr.”

Bunse said celebrating King Jr. is important to her because of the work King Jr. did for the country.

Following the service projects, many individuals made their way to Thomas Hall to participate in the candlelight vigil and march hosted by Alpha Phi Alpha.

The march began with a prayer from Ivan Perkins, a senior corporate communications major and Director for the Unity Gospel Choir who sang throughout the celebration of King Jr. in the Grand Ballroom of the Martin Luther King Jr. University Union.

Perkins said he enjoyed seeing people come together during the event.

“It’s great whenever people of any type of race can come together and celebrate the common goal,” Perkins said.

Perkins said he could sense a difference in the crowd this year from years past.

“This year you can kind of tell there was more energy brought this year and the people who really wanted to be here were here,” Perkins said.

Isaiah McClarien, a junior sports and business management double major and Vice President of Alpha Phi Alpha, hosted the event on behalf of his fraternity.

McClarien said it was important to recognize the contributions King Jr. made during his life.

He said an important take away from the event was “if you put your mind to doing something, you can really achieve it.”

During the event Alpha Phi Alpha awarded Yolanda Williams, an academic advisor in the Office of Inclusion and Academic Engagment and advisor for the Omicron Delta chapter of Zeta Phi Beta Sorority, Inc., with the Alpha Image Award and awarded Trinity Hudson, a junior majoring in psychology and the social justice director of the Black Student Union, with the Annie C. Singleton Award for their activism and social justice work at Eastern.

The keynote speaker for the event, Champaign County Clerk Aaron Ammons, who was introduced to the crowd by his wife, Illinois State Representative for the 103rd District Carol Ammons, said the event served as a reminder to people to continue the work started by King. Jr.

“Remember the work so people can continue the work,” Aaron Ammons said. “It’s nice to have a celebration, it’s nice to remember those things but the greatest form of appreciation and celebration is to actually practice what he preached.”