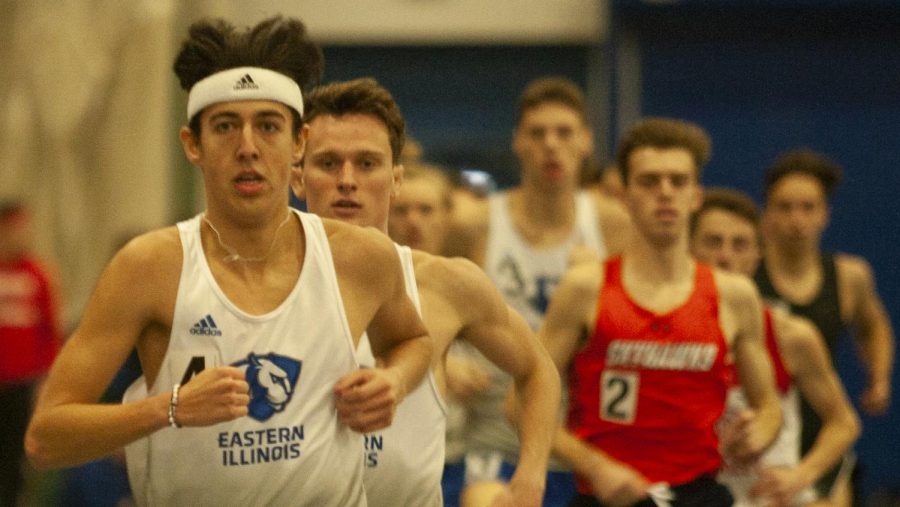 Eastern freshman Adam Swanson participates in an event in the EIU John Craft Invite Jan. 18 in the Lantz Field House. Both the men's and women's track and field teams placed first in the meet.

The Eastern men’s and women’s track and field teams took home seven first-place finishes each at the John Craft Invite en route to placing first out of 15 teams for the whole event.

On the women’s side, redshirt senior Grace Rowan took home first in the one-mile run with a time of 4 minutes, 58.28 seconds which also ranks first in the Ohio Valley Conference.

Three other Panther runners scored points in the one-mile, including junior Kate Bushue who finished second at 5:09.08, freshman Sarah Carr in fourth with a 5:16.77 time, and junior Avani Flanagan at 5:19.56.

In the 3000-meters, senior Lindsey Carlson placed first in her first race ever with a time of 10:05.32, good for second in the OVC.

Carlson also plays for the Eastern women’s soccer team as a defender and midfielder.

Freshmen Zakiya Johnson and Taylor Wright took first and second in the 400-meters as Johnson clocked in a 59.50 and Wright finishing at 59.60.

Freshmen Shanisa Stinson and Akiya Kollore finished second and third in the 60-meter hurdles with times of 8.99 and 9.05 in the finals, respectively.

The women’s team finished with a team score of 196.6 with the closest competitor being Murray State at 140.5

Freshman Damian Clay was the next Eastern competitor to place in the event as he took seventh place with a 23.00 finish for two points.

Three more Eastern runners received points in the event. Senior Joe Carter finished in third with a time of 8:44.95, junior David Thompson finished seventh in 9:01.50, and freshman Trevor Murphy took eighth with a 9:02.14.

Sophomore Dustin Hatfield finished first in the one-mile run with a 4:14.44 time, and junior Jeremy Bekkouche placed third in 4:20.66.

Freshmen Nick Oakley and Adam Swanson also finished in the top ten, as Oakley placed seventh at 4:22.78 and Swanson finished eighth with 4:22.83.

The men’s team finished with a score of 183, outpacing second-place Saint Louis by 110 points.

Both teams return to action on Saturday in Urbana-Champaign for the Illinois Invite, the teams’ first event away from Eastern for the indoor season.