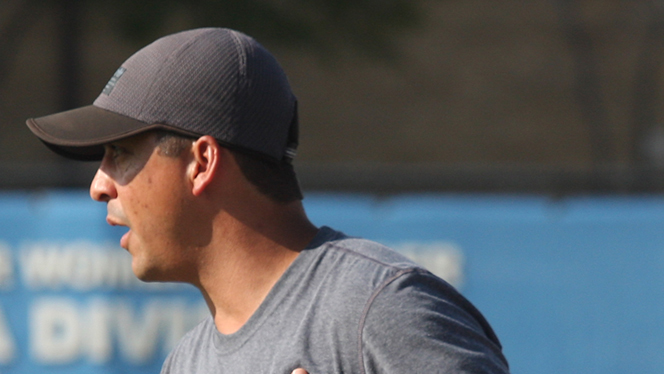 File Photo | The Daily Eastern New’s Head coach Kiki Lara in the middle of coaching a match in Fall 2018. Lara departs the program as the ninth coach in program history and serving five years as the head coach.

Lara coached the program to three straight Summit League tournaments from 2016-2018. Every year the team failed to get past the first round of the tournament.

During Lara’s tenure he has emphasized the importance of being a warrior, competitor, and a defensive minded program. Defensively Lara has coached players such as goalkeepers Mike Novotony and Jonathan Burke, Edgar Mesa who have had their fair share of moments for the program.

Novotny was the Summit League goalkeeper of the year in 2017. He holds school records in most minutes and games played as a goalkeeper, third on the all-time saves list and is top-ten in goals against average in program history.

Burke started playing soccer at Eastern early into Lara’s tenure. The relationship between Burke and his coach is long and strong enough that Burke said it was hard to pinpoint one specific impact his coach has made on him.

“The lasting impact coach Lara had on me was to really trust in the program and the process to get better,” Burke said. “It’s not an easy thing to ask or even do but we both I feel learned to trust each other as well as the program more and more. Even when things were not going my way or the teams way keep your head up and trust it.”

Burke has played two seasons for the Panthers and has provided defensive moments in his two seasons played at Eastern. Burke in his career has made two penalty kick saves that helped the Panthers record conference ties against Denver and Omaha.

“Some of my favorite memories were getting big results with coach especially this last one on the road at Denver where we fought as a team,” Burke said. “Guys on the field and off the field working to get a result with two red cards. Or when we all went to coaches house for team dinners and secret santa.”

Currently Burke holds a 1.4 goals against average through his Eastern career that is currently sixth in school history.

Mesa was a defensive anchor in his years in a Panther uniform. In 2019 alone Mesa guided a defensive core with new coming freshman Quinn Rehcner and Delphy Sabu to help maintain a 1.61 goals against average.

In his tenure Lara’s pride and love for his program was evident. Lara made sure to always have his players, his coaches, and his programs back at all costs.

“Especially these last couple months with him (Lara) he has talked a lot about love,”  Burke said. “Really loving the team and the guys you play with everyday is what makes a team great. Coach’s last words of advice are to love and trust one another.”

With the departure of Lara the men’s soccer program is still looking for his replacement.