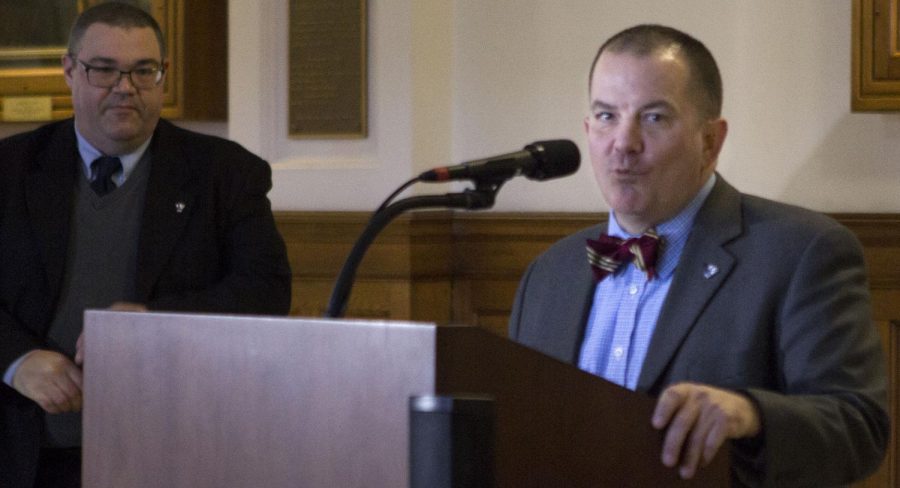 Provost Jay Gatrell discussed the importance of Eastern’s partnership with Golden Apple and the Regional Office of Education NO. 39 to help fill in vacant teaching positions in Illinois during the Golden Apple press release at Old Main on Tuesday morning. Gatrell said the partnership helps create opportunities to “meet the needs of rural school districts, in a time of severe [teacher] shortage” that Eastern is in a position to contribute.

Eastern, Golden Apple, and the Regional Office of Education announced a partnership to address the current teacher shortage in Illinois.

According to Golden Apple, an organization with the goal of preparing teachers for challenging situations, there are over 1,800 vacant teaching positions in the state of Illinois.

Golden Apple has been supporting Illinois education for 35 years, but in 2020 they are introducing the “Accelerators Program”, which will encourage new teachers to stay in their positions for at least four years, improving on the job retention rate for most schools.

Members of the Golden Apple Accelerators Program will obtain their teaching licenses in 15 months, receive a $30,000 stipend to apply to tuition or housing, and receive a handful of other benefits in return for committing to teaching in a targeted school district for four years.

Golden Apple President Alan Mather, spoke during a press conference in Old Main on Tuesday morning to explain why the Accelerators Program is important for achieving Golden Apple’s goals.

“The short term issue [of teacher shortages] leads us to the Accelerators Program,” Mather said. “This first year, we’ve launched this with 50 young people.”

Mather further explained another concept that Golden Apple uses to encourage teachers to stay in one position for longer amounts of time: if teachers stay in a community, they were likely from that community to begin with.

The Accelerators Program will mostly place trainee teachers in the same school district from which they graduated high school, or in one of the other Golden Apple partner districts.

Golden Apple has also partnered with five other universities along with several K-12 schools and education nonprofit organizations.

Eastern Provost Jay Gatrell spoke during the conference on Tuesday about the importance of Eastern’s partnership.

“This opportunity to partner with Golden Apple and our local ROE, to create an opportunity to meet the needs of rural school districts in a time of severe shortage is one which is truly special and unique and one for which Eastern is uniquely prepared and positioned to be successful and contribute,” Gatrell said.

Eastern was established as a normal school, which is a type of school designed specifically to train high school graduates to be successful teachers.

By incorporating their values into the teaching programs and classes which Eastern already has, Golden Apple hopes to continue using this partnership to provide new teachers to the districts in central Illinois.