Ryan Hendrickson, the dean of the Graduate School and chair of the CLAS dean search committee, said Eastern looks for administration experience, commitment to the liberal arts and dedication to diversity and inclusivity excellence in its candidates.

He said the CLAS is by far the largest college at Eastern, and in it exists the most diverse group of students and subjects, so a good candidate needs to back it up with great communication and advocacy.

Each candidate for the CLAS and COE dean searches has a 45-minute-long open session where anyone, including students, faculty and staff, is invited and encouraged to ask questions.

“We value everyone’s insights on the search process, and the dean plays a very important part in shaping and steering and managing the college,” Hendrickson said. “We want extensive participation from all campus constituencies.”
Robert Compton, Barbara Bonnekessen and Stuart Benkert are the three candidates for the College of Liberal Arts and Sciences dean search. All candidates’ 45-minute open sessions are at 10:30 a.m. in room 4440 of Booth Library; Compton’s is on Wednesday, Bonnekessen’s is on Thursday and Benkert’s is on Jan. 28.

Lisa Amundson, Evan Ortlieb and Laretta Henderson are the three candidates for the College of Education dean search. All candidates’ 45-minute open sessions are also at 10:30 a.m. in room 4440 of Booth Library; Amundson’s is on Tuesday, Ortlieb’s is on Friday and Henderson’s is on Jan. 27.
Robert Compton 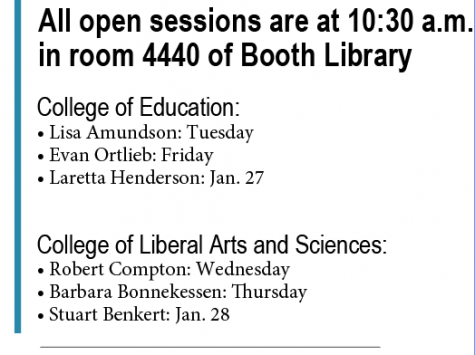 Compton is the current chair and professor of Africana and Latino Studies and political science at State University of New York, College at Oneonta, according to his vita.
Prior to his most current employment at SUNY Oneonta, Compton was a visiting professor at the University of Zimbabwe in 2008 and worked as a government professor at Western Kentucky University from 1998 until 2001.
Compton received his doctorate of philosophy and political science at SUNY in Binghamton in 1998, according to his vita.
Barbara Bonnekessen
Bonnekessen is the chair of the Department of History, Philosophy and Social Sciences and a professor of anthropology at Pittsburg State University, according to her vita.
From 2007 to 2014, she was at the New Mexico Institute of Mining and Technology where she worked as an anthropology and women’s and gender studies professor, chair of the Department of Communication, Liberal Arts and Social Sciences and the director for the Women’s Resource Center.
Bonnekessen received her doctorate in Anthropology from the University of Kansas in 1994.
Stuart Benkert
Benkert is the inaugural Head of the Department of Performing Arts at the University of Tennessee at Chattanooga, according to his vita.
Previous to his position as head of the Performing Arts Department, he was the co-chair of the general education refresh committee from 2017 to 2018 and the assistant provost of Complete College and Student Success at the same university.
Benkert received his doctorate of philosophy and music education from the University of Kansas in 1998.
Lisa Amundson
Amundson is the dean of the College of Social Science and Education at Greenville University, according to her vita.
Prior to that, Amundson worked at St. Louis Premier as the director of special education from 2004 to 2010, a school counselor from 2003 until 2004 and a special education teacher from 2001 until 2003.
Amundson received her doctorate of philosophy and teaching and learning in 2014 from the University of Missouri.
Evan Ortlieb
Ortlieb is the director of the Manhattan Campus in New York, and he is a full professor and director for the PhD Program at St. John’s University in New York, according to his vita.
Ortlieb was previously a course leader/senior lecturer at Monash University in Melbourne, Australia from 2012 to 2015. Prior to his work at Monash University, he was a professor/coordinator of graduate programs at Texas A&M University in Texas.
Ortlieb received his doctorate in curriculum and instruction at Louisiana State University in 2007.
Laretta Henderson
Henderson is the associate dean of the School of Information Studies and an affiliate faculty in African and African Diasporic Studies at the University of Wisconsin Milwaukee, according to her vita.
Previously, Henderson was the chair of the School of Information Studies executive committee from 2014 to 2015 and the co-director of the Black Cultural Center in 2013.
Henderson received her doctorate in curriculum and instruction: language, literacy and culture from the University of Iowa in 2003.