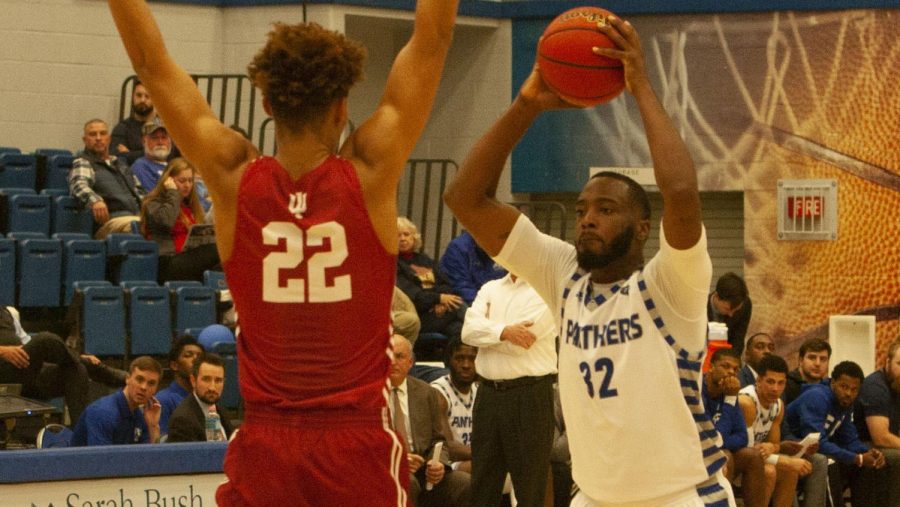 Eastern forward JaQualis Matlock looks to pass the ball inside from the top of the key against Indiana Northwest on Nov. 18 in Lantz Arena. Matlock had six points, four rebounds and two blocks in the Panthers’ 114-61 win.

The Eastern men’s basketball team’s opponent Wednesday may bring back bad memories for the Panthers from last season.

Eastern (4-3) visits Fort Wayne (5-5) Wednesday, but a little over a year ago in Lantz Arena, Fort Wayne’s three-point shooting commanded the attention from everybody in attendance away from the home Panthers to the fact that Fort Wayne could not miss.

OK, so Fort Wayne was not completely perfect from beyond the three-point line, but when the Mastodons attempted 37 threes and made 21 of them, the 16 misses do not carry much weight.

Fort Wayne had complete and utter control over the game, and even when a Mastodon shooter missed a three-point shot, the next attempt was sure to go in: and it did.

The Mastodons were able to get so many looks from three-point territory because their ball handlers were able to penetrate the lane well, causing Eastern’s defenders to constantly be in help defense and run around the court frantically to try to cover all open shooters.

Fort Wayne had Eastern so out of place the whole game that open three-point attempts were plentiful.

The shooting performance was so good that it had members of the media and some athletic personnel believing that the Mastodons broke a record for threes made in a game.

They did not, but the Panthers still walked away from the game with a bad taste in their mouth.

“They did everything right, and we didn’t do much to stand in their way,” said Eastern head coach Jay Spoonhour after the loss last year. “The crazy thing was, it was a two-point game with four minutes left (in the first half), and the whole rest of the game was a run (for Fort Wayne).”

Eastern is playing considerably better defense this season so far, especially when guarding against three-point shooting.

At the point of the game last season (Nov. 28, 2018), Fort Wayne was already second in the nation, through eight games, in total three-point shots taken.

This season, the Mastodons, through 10 games, have already attempted 259 three-point field goals, which ranks as the fifth-most in the country, according to NCAA statistics.

Of the 259 attempted, Fort Wayne has made 93 of them, which results in a 35.9 shooting percentage from beyond the three-point line.

At the point of Eastern’s meeting with Fort Wayne last season, the Mastodons shot 34,1 percent from three-point range, so the Mastodons have not wasted any time improving their shooting so far this season.

Eastern’s improved three-point defense, led by, most-notably, Deang Deang, in fact ranks tied for 31st in the nation, according to NCAA statistics.

But even though Eastern’s three-point defense has been better this season so far, it will be challenged by perhaps the best possible opponent to show what the Panthers’ defense is really capable of.

Spoonhour, also after the loss to Fort Wayne last season: “They attacked us from the minute they started playing; they brought it at a faster pace than we were ready for. The entire time we were on our heels. We were constantly in (help defense).”

Wednesday will show if Eastern can, this time, be the aggressor in the game, or if the Panthers will once again find themselves in shock of such stellar shooting.