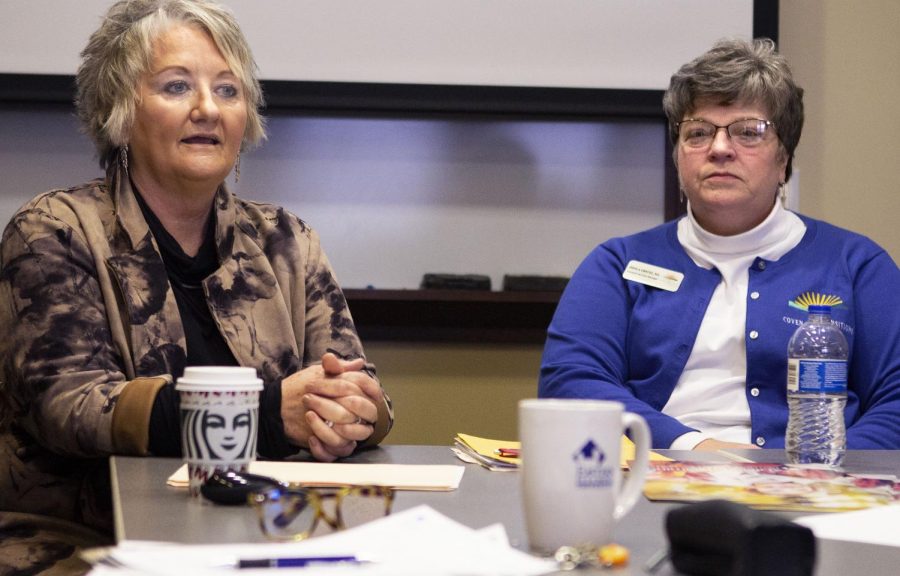 Sheila Greuel (right), a geriatric services manager, listens as Michelle Matteson, a hospice manager and death doula worker, as she discusses what death doulas do and her own experiences as a death doula during “Death Doulas: End of Life Role” at Blair Hall Thursday morning. Matteson said death doulas help fill in for hospice workers since hospice may not have time for too many questions. Death doulas also help support the family and patient emotionally.

When Michelle Matteson first began researching death doulas, or end-of-life doulas, it was because her mother shared her own experience of being a child aware of and present around the death of a neighbor.

Matteson’s mother had brought up the incident of her being a child, shunted off to a neighbor’s house and recalled that they were not pushed out of the room or shielded from death and the dead.

She said she could recall watching a family member or friend lovingly brush the hair of the dead or dying person and then the careful and gentle bathing of the body after the birth of her great grandchild.

She said her mother had shared that since her time, it seemed to have flip flopped, births are shared and celebrated, live streamed for family and friends and that death is much more taboo than it used to be, children are shielded from its existence.

It was then that Matteson had the idea for something like a midwife for death — someone to be there to provide comfort and support for the dying and provide that through both the entering and exiting of life.

She said she was surprised to find a movement like that already existed; she was introduced to the world of the end-of-life doula and shared her experiences Thursday at Eastern.

The Academy of Lifelong Learning hosted an event Thursday to educate people on death doulas, what they do and how they can become one as well as how they can utilize a death doula as their life comes to an end.

Matteson is currently in the final steps of receiving certification through the International End of Life Doula Association.

Alongside Matteson in her presentation was Sheila Greuel, a geriatric services consultant at Covenant Transitions, which is based out of Mattoon.

Matteson outlined different roles, responsibilities and ways that an end-of-life doula can help create a space of comfort and calming for family, friends and the terminal person. These can include exploring the meaning in the life of the dying, initiating legacy projects, assisting in unfinished business, creating sacred spaces, assisting with religious or secular rituals and developing vigil plans.

The doula is often present at the vigil and provides assurance to the dying person and the family that their plan is being implemented and taken care of as they would have wanted it.

Death doulas can provide some touch and holding for comfort, provide family with respite, ensure that the dying person is not alone when the time comes and make family members feel more comfortable as they do not have to be alone with the dying person.

Matteson said a doula does receive some training, they can help to provide information on signs and symptoms, but are not medically trained professionals.

They can also provide practical support to the family and dying person, coordinating food plans, helping to bridge the gap between the dying person’s wishes and their family, Matteson said.