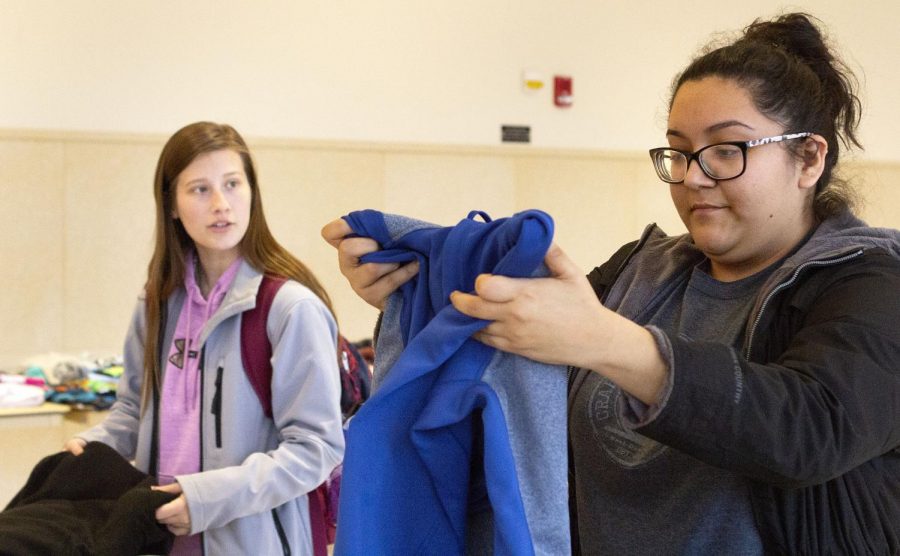 Alyssa Bettenhausen (left), a sophomore majoring in biological sciences with an emphasis in veterinarian medicine, and Lizette Aguilera (right), a junior environmental biology major, look at clothes at the “EIU: Swap and Share” event organized by the Environmental Health and Sustainability class in the Martin Luther King Jr. University Union on Tuesday afternoon. During the event, students in the environmental health and sustainability class handed shoppers T-shirt bags to reduce plastic waste.

Ally Turner, a sophomore biology major, said that the event was meant to fight an environmental issue on campus.

Turner said textile waste makes up a majority of the billions of pounds of landfill in the U.S.

“It’s most of what fills our landfills; 25 billion pounds is produced in the U.S. per year, which is like 85 pounds per person, which is a lot,” Turner said.

Turner also said that using a local solution for a global problem is a part of the class and a part of coming up with the event.

“Our main motto is to think globally, act locally, so we did, and that’s how we came up with this swap and share,” Turner said.

The class chose to focus on textile waste because they said it was an under-addressed problem in the campus community.

“The university is recycling plastic and papers, and most high schools do that, but they don’t do as much for textile waste,” said Austin Warrem, a senior pre-med major working at the event.

Alyssa Bettenhausen, a sophomore biological sciences major who was shopping at the event, said a clothing swap was environmentally friendly and beneficial to students.

“I just think it’s a better option than throwing everything out, and most people don’t have cars while they’re living on campus, so they can’t just drive it to Goodwill whenever,” Bettenhausen said.

Bettenhausen also said that having the swap and share is more sustainable for students because instead of buying new clothes, students can refill their closets at the event.

“It’s nice that you can come in here and swap it out; it’s better than just giving it away,” Bettenhausen said.

Bettenhausen said she appreciated the swap and share because it gave her a place to donate old clothes instead of throwing them out.

Turner said after the swap and share, any leftover clothing was donated to homeless shelters in the area and different departments at Eastern.

“We’re working with the Haven and a couple other homeless shelters around Charleston and Mattoon that a lot of the clothes are going to,” Turner said. “The fashion department here at EIU, the theatre department and the art department are all going to take some clothing to reuse in projects, so it’s going to be reused that way.”