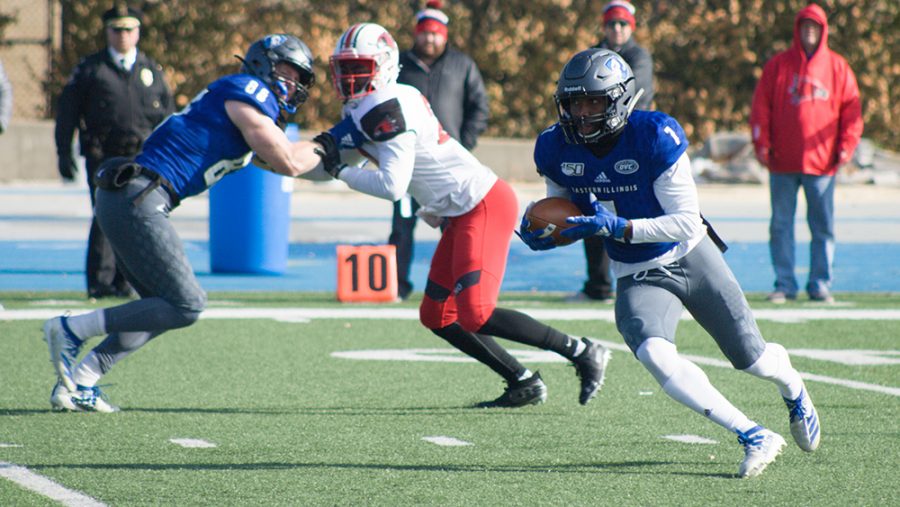 Eastern receiver Isaiah Hill turns the corner as James Sheehan blocks on a 73-yard completion in the first quarter against Southeast Missouri on Nov. 16 at O'Brien Field. Hill had 13 catches for 152 yards and a touchdown in the Panthers' 26-12 loss to the Redhawks.

It had all the feels of a game that was closer than a 26-12 final, but costly special teams blunders gave the Eastern football team its 10th loss of the season to Southeast Missouri Saturday at O’Brien Field.

Eastern led the Redhawks 7-6 at halftime and the Panthers looked for a while like they might be on their way to picking up a second win of the season, but Eastern’s special teams unit allowed Southeast Missouri to get back in the game and close the door on Eastern’s home-finale.

“I really felt that at all times we were in the football game,” Eastern head coach Adam Cushing said after the loss. “There was a really strong sense of ‘we’re going to win this football game’  the entire game.”

The Redhawks opened the second half returning an Eastern punt 46-yards for a touchdown that pushed the score to 13-7.

Eastern was still within one score and even cut the Redhawks lead to just three after Christiaan Masucci made a 27-yard field goal at the end of the third quarter, pushing the score to 13-10.

But just as quickly as Eastern was able to cut its deficit to three points, Southeast Missouri scored another touchdown early in the fourth quarter, putting Eastern down two scores, 20-10 with 13:41 to play.

Even here Eastern still felt the game was well within reach and might have been even closer than the 10-point gap the scoreboard showed. But again, Southeast Missouri struck, this time with 4:47 to play, scoring another touchdown, essentially putting a period on the game.

Eastern blocked and returned Southeast Missouri’s extra-point attempt for a two-point score that made the score 26-12, but by that point it was too-late for the Panthers to really make the extra two-points count.

Even Eastern’s players felt the game was closer than what the scoreboard showed, but added that Southeast Missouri’s punt return to open the second half in some ways took the wind out of Eastern’s sails.

“I think coming out of half in that third quarter, that punt return for a touchdown, that was tough, that was tough to see,” senior linebacker Joe Caputo said. “They had the momentum coming and it kind of went back and forth after that, but that’s a good team and they took that momentum and carried it out the rest of the game.”

Many of Southeast Missouri’s points were the result of Eastern’s special teams play being subpar. From the punt return which actually put seven points on the board, to Eastern’s punts which often left the Redhawks with short-field situations and even Eastern’s own kick return game which left them with long fields, special teams again and again cost the Panthers on Saturday.

Eastern was without starting quarterback Harry Woodbery who exited the game after taking a hard hit and was later on the sideline in an arm-sling. Woodbery was 6-of-9 passing with 118 yards and one touchdown before his injury.

Jaylon Banks was Woodbery’s first replacement to see the field, but after a couple of unsuccessful drives, Banks was replaced with freshman Jonah O’Brien who was appearing in his first game.

O’Brien finished 12-of-21 passing for 84 yards and one interception.

Wide reciever Isaiah Hill said losing a quarterback is something that you just never prepare for, but the team has to stay out there and hold up whatever quarterback is under center.

“We just tried to do our best to keep both of the quarterbacks up, keep our confidence right and just do our offense, do what we need to do to score touchdowns and get our team in a better position to win the game,” Hill said.

Hill finished the game with 15 receptions for 152 yards and one touchdown, but was also the star in one of the more bizarre moments of the game. Hill had an 85-yard touchdown pass called back because he waved to the defenders chasing him down the field, drawing a taunting penatly which negated the score and moved the Panthers back down the field.

Hill redeemed himself just a few plays later, getting his touchdown anyway on a 26-yard score from Woodbery.

The touchdown he scored after the penalty left Hill in a position where he was able to laugh about his mistake after the game.

“My coaches got on me for it… I was just watching a little Tyreek Hill before the game so I just got a little too carried away,” Hill said. “I am glad I got to make up for it, that would have been bad on me”

Eastern’s final game of the season is next Saturday on the road against Austin Peay.