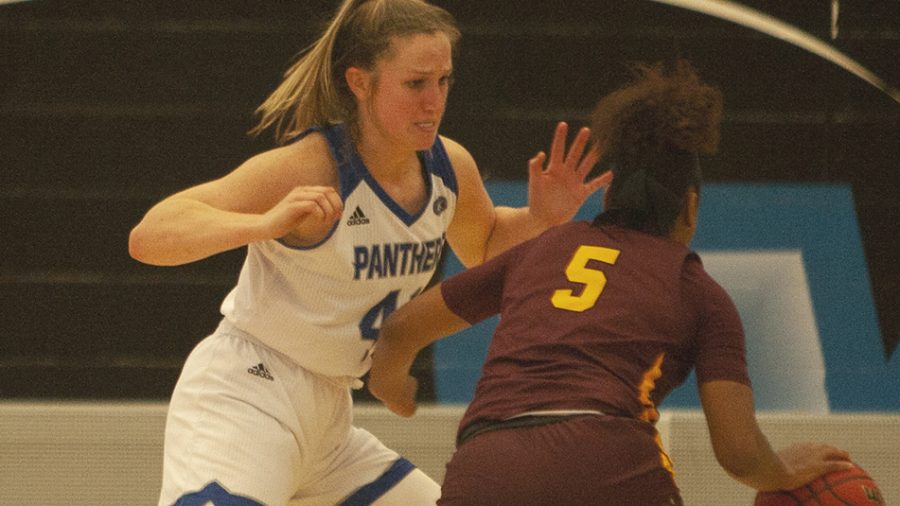 After the Eastern women’s basketball team shot 61.5 percent from the field in the first quarter against Loyola-Chicago Wednesday afternoon, a quarter that head coach Matt Bollant said was the Panthers’ best so far this season, the offense went cold.

The Panthers shot 25 percent in quarters two through four, shooting 10-of-40 from the field, including 2-of-16 from three-point range. They finished with a shooting percentage of 34 percent on the game and 21.1 percent from beyond the arc. They lost to the Ramblers 67-51.

Bollant said that the team had a hard time recognizing which shots to take and which ones to pass up, leading to a low percentage on the game.

“We are a little bit immature, and we’re trying to figure out what a good shot is,” Bollant said. “Last game against Indiana State we took a lot of tough shots, and today in the second quarter we took some tough shots.”

Against Indiana State, much like the game Wednesday, the Panthers started hot from three-point range. They shot 4-of-8 from three in the first half against the Sycamores, but then missed all seven attempts in the second half, finishing the game with a three-point percentage of 26.7.

Back to Wednesday’s game, there were several occasions in the second half, specifically in the third quarter with Loyola-Chicago continuing to pull ahead, where Panther shooters passed up open looks from beyond the arc.

“All of a sudden, now we’re passing up some good shots,” Bollant said. “That’s a hard thing for an immature team, a young team, to know what a good shot is.”

“A lot of coaches just let (their players) shoot and do whatever,” Bollant said. “That’s not who we are. We want to teach them and grow them, and part of teaching them and growing them is figuring out what’s a good shot and what’s a bad shot and just having that feel.”

Bollant said that he thinks that feel can be lost when tough shots are attempted early on in a game, leading to uncertainty in the late quarters.

“I guess that’s part of the maturing process, and we’ve got a lot of kids getting playing time really for the first time,” Bollant said. “In high school, most of the time there isn’t a bad shot that they take.”

Of the four Panthers that made a three-pointer, two of them, Lariah Washington and Morgan Litwiller, are freshmen. Each made their first career three-pointer and set high marks for minutes played on the season.

Washington logged 31 minutes, four more minutes than she had in the previous two games combined. She had 14 points in total, shooting 4-of-10 from the field and recording team highs with six rebounds and four steals.

Litwiller was on the court for 15 minutes after playing three minutes against Indiana State Nov. 10 in her first action of the season. She shot 1-of-2 from the field, with her make being the three-pointer. She also collected a rebound and a steal.

The Panthers will try to find their shots on the road Saturday against Illinois-Chicago, playing outside Lantz Arena for the first time this season.