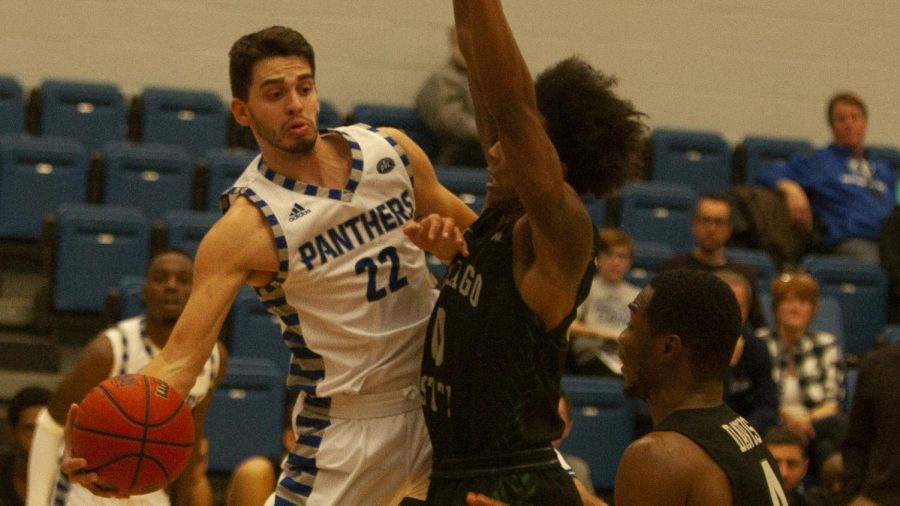 Eastern guard Josiah Wallace wraps a pass around a Chicago State defender in the game Nov. 12 in Lantz Arena. Wallace had six points, three rebounds and three assists in the Panthers’ 98-34 win.

The men’s basketball team got their first win of the season at home against Chicago State 98-34 Tuesday night. Junior Deang Deang led all scorers with 21 points.

Deang led the Panthers in scoring from start to finish, scoring eight quick points in the opening minutes including making his first two-three pointers of the game.

“He (Deang) can do lots of stuff,” Eastern head coach Jay Spoonhour said. “He can shoot it well, has a really good feel for when to cut, and finishes the ball around the goal. He isn’t always going to score like this, but he can.”

Junior Mack Smith followed Deang’s pace, making his first three-pointer of the game right before the media timeout. Smith increased his nation-leading streak of consecutive games with a three-pointer made to 52 games.

Smith finished the first half and the game with 13 points, knocking in three three-pointers, and shot 50 percent from the field.

The Panther defense allowed only five points in the first 10 minutes of the game, outscoring Chicago State on a 23-0 run in the opening moments of the game. The Panthers defense forced the Cougars to commit 17 turnovers in the first half and held their offense to only one assist.

Chicago State’s leading-scorer Xavier Thompson came into the game averaging 28 points per game. The Panther’s held him to only four points and a 2-12 field goal night.

“The game plan was nothing crazy other than an acknowledgment knowing that he can score, and he would be looking to score,” Spoonhour said.  “The way the game started he got right to the rim a couple times and JaQualis (Matlock) did a great job two times in a row and came over and blocked a couple of them. He’s somebody that can make a lot of points and I thought our help guys did a really good job.”

The Panthers showed their offensive chemistry on the court tallying 29 assists as a team. The Panthers were able to have five players in double figures in scoring while also having every player who played have multiple assists.

“It’s letting us know that we can play together as a team,” Smith said. “We can have fun with what we are doing, but we also gotta know there’s a lot more where that came from. It starts off the court with team bonding and bringing that on to the court.”

The men’s basketball team will play their next game on Nov. 18 against Indiana Northwest. The game will be at 7 p.m. at Lantz Arena.