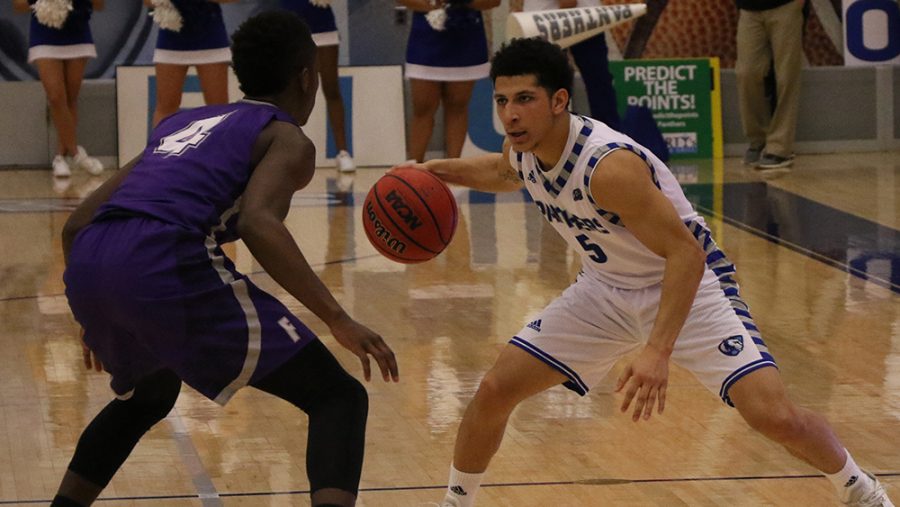 File Photo | The Daily Eastern News Shareef Smith sets up a move to get around his defender in Eastern’s 90-37 victory over Fontbonne in December 2018. Eastern hosts Chicago State Tuesday for its first home game.

But Johnson is, instead, the leading scorer for Chicago State after two games, and coincidentally, he will end up in Lantz Arena anyway Tuesday at 7 p.m. when Eastern hosts the Cougars.

After Eastern’s 65-52 loss to Wisconsin Nov. 8, Eastern assistant coach Rand Chappell told Mike Bradd, Eastern’s play-by-play announcer, in a postgame interview that Johnson was a player Eastern looked at, in some capacity, in recruiting.

Looking at Johnson’s performance so far this season, a clear image emerges as to why Eastern’s staff may have been interested in him.

In Chicago State’s season-opening victory over Judson University, Johnson scored 37 of his team’s 103 points (more than one-third of the team’s total).

He did so efficiently, too, as he shot 13-of-18 overall, 7-of-9 from three-point range. Johnson also tied for the team lead with five assists.

In the Cougars’ second game, a 98-85 loss to Loyola Maryland, Johnson did not shoot well, 5-of-19 overall and 1-of-5 from three-point range, but he still led the team with 19 points and six assists.

Johnson has shown his ability to score from all-over the half court in those first two games, and what adds to his offensive threat is his free throw shooting.

Against Loyola, despite having a bad shooting night from the floor, Johnson shot 8-of-11 from the free throw line.

In the season-opener, he made 4-of-5, and if he is able to consistently shoot that 75 percent from the line, he could add another level of attack Eastern must defend against.

Last season, Eastern had difficulty guarding and stopping three-point shooting, but that has been better through its first two games, against much tougher opponents.

Johnson, though, is not afraid to pull up from three-point range (shot 8-of-14 through two games) and may present a problem in that regard.

Plus, with his free throw shooting, Johnson may expose Eastern’s problem of fouling a lot, especially on drives if a player gets around them or goes up for a shot.

That means that, if Johnson is Chicago State’s main ball handler, Eastern will have its hands full trying to neutralize his scoring, on top of making sure not to give him the chance to beat them at the free throw line.

“Xavier had a really good season last year in junior college,” Spoonhour said. “He is fast and can really score it.”

The Eastern-Xavier Johnson connection does not stop at recruiting, though because Eastern’s Jordan Skipper-Brown played against Johnson twice last year.

In the two teams’ first meeting Jan. 16, Skipper-Brown had eight points, three assists and six rebounds, while Johnson had 11 points and one assist.

Skipper-Brown’s McLennan squad got the victory on the road, 70-66, but when Hill College visited McLennan, Johnson’s squad claimed the victory, 83-76.

Although Eastern may know what to expect from Johnson, scouting the rest of the Cougars may be difficult.

Chicago State only has four returning players from last season: Christian Jacob, Noah Bigirumwami, Michael Johnson and Eugene Witherspoon. Of the four, Johnson is the only returning guard.

Furthermore, out of those four, only Michael Johnson and Jacob have scored, as Jacob averaged five points in the two games and Johnson scored six points in one game.

With that, the newcomers have driven this Chicago State squad so far. After Xavier Johnson’s team-leading 28 points and 5.5 assists per game, guard Andrew Lewis is second with 14.5 points per game and three assists.

Forward Jace Colley is the other Cougar who averages double-figure scoring so far, with 10 points per game. Ke’Sean Davis is not a player to downplay, though, as he averages 8.5 points per game and leads the Cougars in rebounding with 7.5 rebounds per game.

For Eastern, newcomers have also been the main scorers, too.

George Dixon has been the standout for Eastern so far, as he has shown his ability to be a flex his guard designation with his 6-foot 5-inch, 230 lb frame by being able to bang inside with the “bigs.”

Dixon averaged 12 points and nine rebounds through Eastern’s first two games, including a double-double in Eastern’s opener against Texas Tech.

Marvin Johnson, Skipper-Brown and Deang Deang round out the leading scorers for Eastern, averaging 8.5, 8 and 7.5 points per game, respectively.

Eastern has benefitted from a well-balanced offensive attack so far, with a lot of players contributing to the scoring.

Other notes for Tuesday’s game:

Mack Smith and Josiah Wallace have gotten off to a slow start, averaging 6.5 and 3.5 points per game, respectively. Smith extended his nation-leading streak of consecutive games with a three-pointer made to 51 but is shooting 30 percent from deep so far. Wallace is shooting just 16.7 percent from the floor in two games (3-of-18). Despite rough starts, there is a lot of season to go, and the first home game may be the time for both to shake off their performances thus far. To be fair, Eastern’s first games were against Texas Tech and Wisconsin, schools with the type of talent Eastern will not face all year long.
In its first two games, Eastern has fouled 42 times total, compared to opponents’ 29. Again, those are games against major college talents, but fouling was an issue for Eastern last year, too. Going forward, the Panthers will need to limit its fouling because more opponents’ free throws will only pile on to any other issues Eastern may face.
Eastern, as a team, has scored 39 points off three-pointers and 11 from free throws. That means the other 62 points out of the team’s 112 total from the first two games have come off two-point shots. This may show an Eastern team trying to rely less on three-pointers than it did last season. The Panthers are only shooting 36.7 percent from the field, though, so converting more shots into points will be key for them going forward.
Despite the loss to Wisconsin, Spoonhour liked some things about his team’s performance. “We sustained our defense for nearly the entire game on Friday,” he said. “I was extremely pleased with that. Consistently guarding will be a key for us going forward. We are still figuring some things out offensively.”