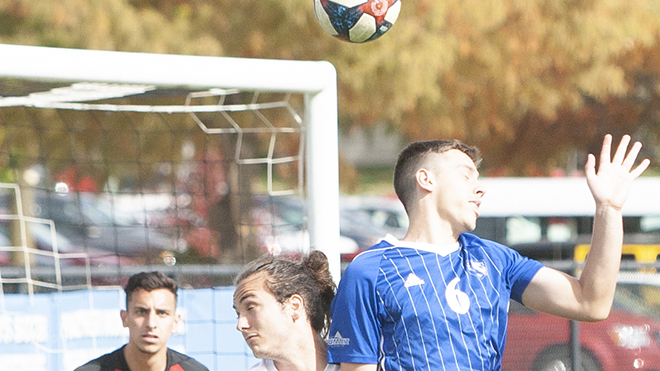 Dillan Schorfheide | The Daily Eastern News Davi Girardi (right) shields his eyes from the sun as he fights to win the ball out of the air. Eastern tied Omaha 0-0 at Lakeside Field Oct. 19.

The men’s soccer team’s season ended Nov. 9 when Denver won their match against Fort Wayne 3-1 to clinch the final spot in the Summit League conference tournament.

Despite the Panthers not making the Summit League tournament, this team showed improvement in its record and were just only one point away from being in the tournament.

“I feel disappointed that we didn’t make the tournament since I know this team deserved way more than that,” said redshirt senior Christian Sosnowski. “This was the best team that I was a part of at EIU, and I wish we could’ve showed how good we actually are in the playoffs.”

The men’s soccer team’s record this year was 5-9-2. This was the first team since 2016 that has recorded five wins in a season.

Offensively the Panthers scored 13 goals on the season while having 10 goal-scorers accumulating the goals. Both were improvements on their numbers from 2018.

All of these players provided moments throughout the season that helped secure wins whether it was defending their assigned areas, making key stops or working as a collective unit every game.

“I loved playing every game with my backline and especially towards the end of the season,” Burke said. “We all felt very confident and know each other’s strengths and weaknesses a lot more now. It’s going to be tough losing Edgar next season, but as one leaves another will step up.”

“My favorite moment for me personally has to be watching the younger guys grow into great players this season,” Burke said. “Over such a short period of time we have had so many guys develop and get better. We have a good amount of guys coming back who are going to contribute a lot next season.”

The Panthers will return most of their offensive players from 2019: Their two leading goal-scorers, juniors Davi Girardi and Shady Omar, six other players who have scored a goal in 2019, and their leader in assists, redshirt sophomore Cameron Behm.

On defense, the returnees will be Burke, Sabu and Rechner.

For Rechner and Sabu these freshman stepped up into their roles in a defensive soccer culture and made their imprints early. Throughout the season both players were able to control their areas on defense and were integral pieces in the Panthers’ three conference shutouts this season.

“I think defensively this EIU soccer program is always going to be built in a certain way and they certainly came in and filled some big shoes and did a very good job of being first year players that took on a lot of responsibility and responded very well,” said head coach Kiki Lara. “It wasn’t always perfect for them, it wasn’t always steps forward and there were some steps backward, but the biggest thing for them I think is that they were humble enough to accept where they made mistakes and they got after it the next day and got better.”

Lara continued: “They are two personalities that did not accept failure very well, continue to grow everyday, and they played some of their best soccer at the end of the year. We hope they continue on and stay humble.”

The men’s soccer team will lose their seniors in Sosnowski, Alex Castaneda, Cole Harkrader and Mesa.
They left their mark, whether in practice or in a game, on the men’s soccer program that Coach Lara “hopes the underclassman paid attention to and hopes mirror these seniors.”

“The biggest things these guys brought to the program was their love, care and concern for the program,” Lara said. “We are so grateful for them to have come into our lives and grace us with their presence these last few years in our program. They moved in it in a positive direction and our goal is to maintain what they’ve built and grow upon it.”

The men’s soccer team’s season might be over, but its team has goals off the pitch.

The team wants to achieve a team GPA of 3.2, which would be its highest in four years. The men’s soccer team also wants to win the EPIC award, which it has won twice in the last four years.

EPIC is a competition between all athletic teams for community service, team GPA and team success.