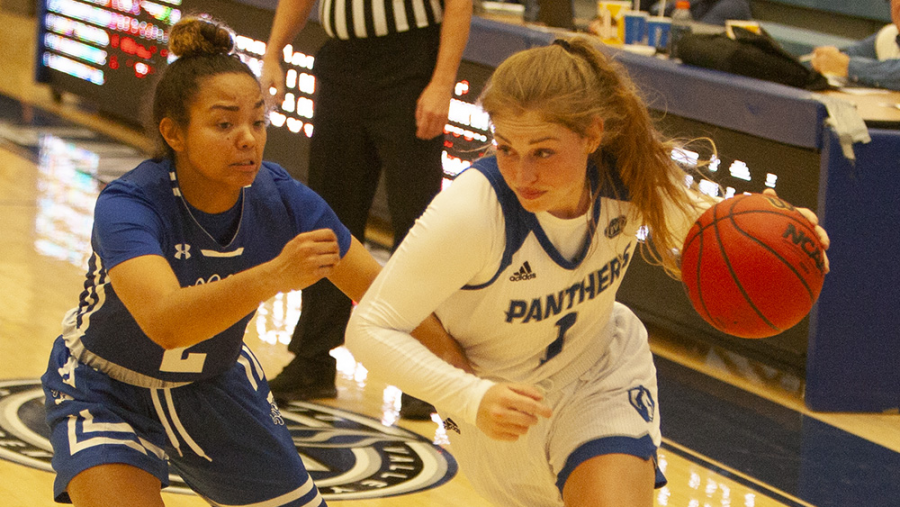 Eastern guard Kira Arthofer drives around a defender against Indiana State Sunday in Lantz Arena. The Panthers lost to the Sycamores 59-57.

The Eastern women’s basketball team (1-1) lost with the ball in its hands Sunday afternoon to Indiana State (1-1) 59-57 in Lantz Arena.

The Panthers trailed the Sycamores by three points with 12 seconds to play in the game and had the ball in their possession with the intent of making a three-pointer and tying the game on that possession. It did not work out that way, however, and guard Karle Pace had to settle for a two-point basket instead, and the Panthers ended up trailing 58-57 with five seconds to play.

Eastern fouled Indiana State and sent them to the free throw line where the Sycamores made its first free throw, pushing the score to 59-57. The Sycamores threw Eastern through a loop, however, missing the second free throw.

The Panthers rebounded the ball, but had planned for Indiana State to make the free throw and it appeared for just a second that the miss caught the Panthers off guard enough where they were unable to get the ball down the court and get a shot off before the clock expired.

The Panthers not only wanted the Sycamores to make the free throw, but also wanted a three-pointer on their previous possession instead of the two-point basket.

“We wanted a three,” Pace said. “Kira (Arthofer) was going to come down and pitch, but she was super close so the back door was open, and I probably should have pulled it out; we would have had a chance to get a three, but I was just kind of thinking maybe we could get a steal or get something.”

Eastern struggled shooting during stretches in the second quarter and early in the third quarter, missing its own shots while allowing Indiana State to go on score-swinging runs.

“I think they were just patient, kind of, on offense and we weren’t,” Pace said. “It wasn’t like they just hit us, we just took rushed shots; we weren’t scoring and they were.”

The Panthers were getting open looks in the game, but on multiple occasions were just unable to convert them, leaving them feeling like they left points on the court.

“Early in the game we lacked a little poise, and then we got going and the end of the first quarter and the second half we got a little sped up and then when we did get some shots we just didn’t make them, you know,” Bollant said. “Lariah (Washington) had a couple of looks early; I think she makes one or two of those. She probably plays a whole lot better, and sometimes you need to make a shot to make your next shot. We shot 40 percent, and I thought we had better looks than 40 percent.”

Eastern’s next game is Wednesday at noon in Lantz Arena against Loyola-Chicago.