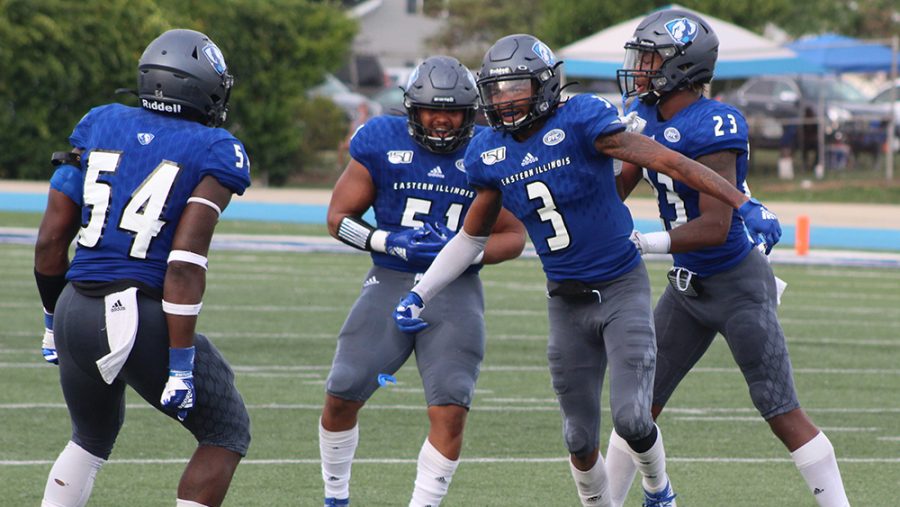 Members of the Panther defense celebrate a big play against Tennessee Tech Sept. 28 at O’Brien Field. The defense forced two turnovers in the game, a 40-29 loss.

The OVC’s two last place teams will meet Saturday in Nashville when Eastern (0-9, 0-5 OVC) plays Tennessee State (2-7, 1-4 OVC) in a battle between two teams who are playing more for pride than anything else.

Neither team is playing for any real implications as both were eliminated from any contention or postseason talks a long time ago, but for Eastern, they are now playing to get a win and right some of the many wrongs that have happened on the football field this season.

“I think that’s what we have been focusing on is that we have only got three games left, but we can erase a lot of things that happened throughout the season,” said Eastern Head Coach Adam Cushing.

Cushing said the team can erase a lot of what has happened by just staying focused on the program’s mantra of having the right attitude about the game of football.

The team’s attitude will be ever important this week as the Panthers are coming off a game two weeks ago in which the offense put up its second lowest yardage output in program history, mustering just 89 yards against Eastern Kentucky.

The Panthers have had two weeks, thanks to a bye week last week, to put that game behind them. Cushing said the team put the ugly Eastern Kentucky loss to bed on Monday like it does every week and then took the bye week to focus on the team and get its players in the right state of mind.

“It’s been long, it’s been a grind, physically, mentally, whether we were 9-0 or 0-9, football is a long season,” Cushing said. “Football is a physical grind as well as taxing mentally. We ask for a high, high level of focus every single morning for what amounts to be about four straight months. So you always have to take the bye week to just let those guys be college students for a couple of days, 48-hours and really get a chance to focus on their academics, so with the stretch run of the season here we can come back into focus.”

If Eastern was going to draw up a scenario in which it could see a win this season; then it probably could not do it any better than getting Tennessee State off a bye week.

Tennessee State has been arguably the worst defensive team in the OVC this season, giving up a league-worst 469.7 yards per game and a second-worst 34.6 points per game.

But Tennessee State’s offense can hurt teams, ranking second in yards per game (417.3).

“I think the shorter answer is ‘what doesn’t he bring to the field?’ He does everything well,” Cushing said. “He’s a great route runner, he can make people miss after if he gets his hands on the football, they do a great job as a coaching staff of putting him in good situations, making you try and figure out where you want to put the extra guy in terms of the defense and if you put the extra guy in the wrong place, he’s going to make you hurt for it.”

Cushing said Eastern’s plan will be to not let Rowland single-handedly beat them; they understand they will not completely take him out of the game, but keeping him from making a huge effect on the game is going to be key.

Eastern and Tennessee State kickoff Saturday at 2 p.m. in Nashville.