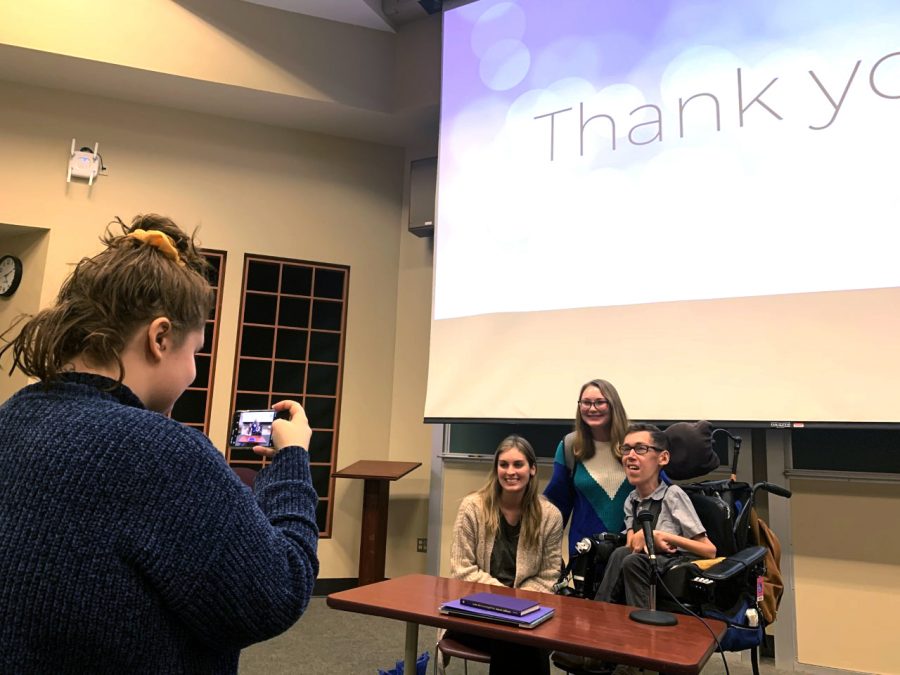 Cameron Kraig, a junior special education major, takes a photo of her friend Sydney Cacioppo with YouTube stars Hannah Aylward and Shane Burcaw at Buzzard Auditorium on Monday night. Kraig and Caioppo expressed their excitement over Aylward and Burcaw coming to Eastern and hearing the two talk about their love and fighting against the stigma against disabilities.

YouTube personalities “Squirmy and Grubs” want to change the way disabilities are perceived in today’s society.

Shane Burcaw and Hannah Aylward, also known as Squirmy and Grubs, spoke to a group of students, staff, faculty and community members Monday night about their own relationship and how interabled relationships are just as fun and normal as any other.

Burcaw lives with spinal muscular atrophy, a disease that has put him in a wheelchair since he was 2 years old.

“I think that our society has an overwhelmingly negative understanding of disability,” Burcaw said. “Talking about inclusivity and talking about the authentic picture of disability is helping to change that narrative.”

They started their YouTube channel in June 2018 to document their month-long road trip and since then their following has grown to nearly 500,000 subscribers.

Aylward said once their following grew larger, the two realized they had the ability to bring awareness to disability perception issues.

While they have experienced positive feedback from their subscribers, they have also had their fair share of negative comments.

Some have called their relationship “inappropriate and wrong” and asked why a “beautiful girl” like Aylward would date someone “so extremely handicapped.”

Burcaw and Aylward were able to laugh off the comments and rebuttal with jokes but also realized that what some people say to them on the internet shows that disabilities are still seen differently than they are.

Burcaw said the way they can accomplish those goals is by telling their story, starting with their first date in Pennsylvania where Burcaw is from, their first trip together to New York City and spending four months apart while Aylward studied abroad.

Since they started telling their story, Burcaw said they have heard how they have changed others’ lives.

“We hear from people with various disabilities every day who maybe didn’t feel like they could have a relationship because of all that messaging from society that’s like, ‘You’re not worthy,’” Burcaw said. “We were able to show them that it happens and it’s normal.”

Aylward said some of the negative commenters have changed their mindset after watching more of the duo’s videos.

“We’ve gotten comments from people who leave mean comments first and then will come back weeks later and apologize and be like, ‘I watched more of your videos, I’m sorry I was close-minded,’” Aylward said. “Those are really nice when we hear that.”

Erin Browne, freshman theatre arts major, said Burcaw was an inspiration to everyone.

Vanessa Gower, junior special education major, has watched the couple’s channel for about a year and said she was glad to see them.

“They turn all of the bad things into positive experiences,” Gower said. “They are the reason that I smiled today.”