McCleery ‘twirls’ her way toward graduation 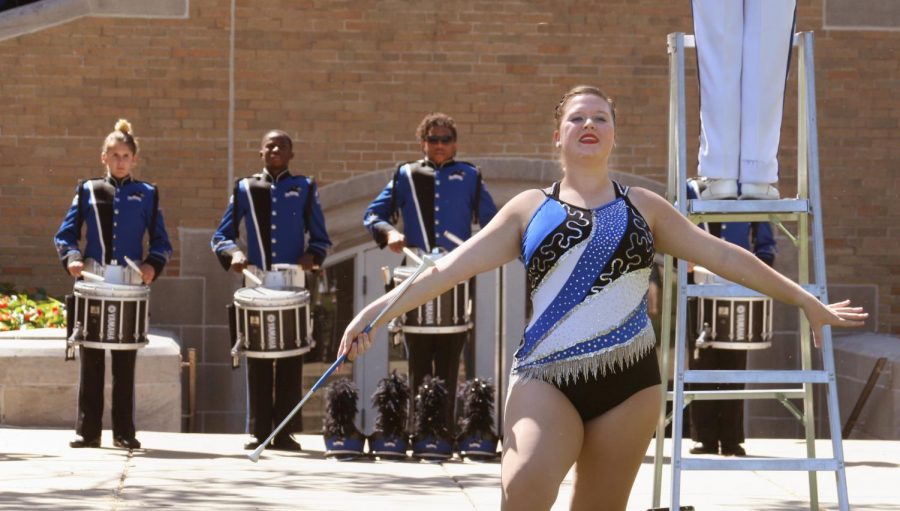 Cassie McCleery, a senior majoring in family consumer science with a focus in education, twirls during a Library Quad performance before a September football game.

Cassie McCleery has a decision to make: to continue her competitive baton twirling for the last year or to focus on her future career in teaching.

The senior family and consumer sciences major with a focus in education and only twirler in the Panther Marching Band started twirling 16 years ago.

She twirled all through grade school and junior high, but when she got to high school, she had to practice twirling on her own time because her band director was not a fan of twirlers and did not allow one to be in the band.

McCleery said although that was a frustrating time, she at least got to twirl for the crowd before the high school football games.

Though she has been twirling since she was 6 years old, she said her earliest memory came from a junior high performance.

“I don’t even remember what song it was,” McCleery said. “We wore these black outfits and then we had two of the younger girls with us, and they wore these green outfits and it was a very old song that we did … at a basketball game.”

The embarrassment McCleery felt from that performance is something she said she can look back on and laugh at now because the memory reminds her of how far she has progressed as a twirler.

Just this past summer, she competed and took first place in the intermediate section of the Illinois Miss Majorette baton twirling competition.

After high school, McCleery moved on to Richland Community College in Decatur, Illinois and transferred to Eastern after a year and a half at Richland.

She described the typical twirler audition process as a rigorous one that often includes an initial tryout video, additional performance video clips, clips of the auditionees performing their own routines, phone interviews with a band director, live auditions, live interviews and call backs.

When McCleery auditioned for the twirler position for the Panther Marching Band, she sent in a try out video and had a phone interview.

She said her interview process was a bit tense because she does not see herself as the extrovert some may see her as.

“I’m usually a very shy person, and people would be surprised because I get out in front of hundreds of people and (perform),” McCleery said. “To me, the people are so far away, and when I’m performing, I can’t see them.”

Not being able to see the faces in the audience has made performing easier for McCleery because she can pretend that they are not looking at her; however, she said she still gets nervous, especially before her competitions.

The difference between performing at a football game and competing is that at a competition, everyone there already knows how a performance should look and can distinguish what is right and wrong in a routine, McCleery said.

“They’re all baton twirlers, they’re all baton moms (and) they’re all coaches, so they know,” McCleery said. “Here (at Eastern), no one has any idea what I’m doing, so it’s a lot less nerve-wracking because even the simplest things I do people find cool.”

McCleery often gets praise from people who watch her perform. She has heard how seamless her routines are and how entertaining she is to watch, but she said she does not let that get too far in her head.

“I always expect better of myself,” she said. “Even though people say I did great and I know that they think I did great, I still know that I could do better. My coach kind of instilled that in me.”

Now, McCleery must decide what she is going to do next semester when she starts student teaching to finish her degree.

Because of the time-consuming student teaching process, McCleery said she does not know if she will have any additional time to spend practicing and training for any competitions.

When she won the Miss Majorette competition in June, she realized she could be done competing and be happy about it.

“I’m getting to the point where I have a lot more things to do and focusing on this is just too much right now,” McCleery said. “I’ve kind of come to terms that I’m like, ‘Yeah, I think it’s about time.’”

She said she wants to continue her passion for twirling somehow if she ultimately decides she is done competing.

“I never thought that I would be a coach because I wasn’t really good when I was younger so I was like, ‘How am I going to teach people if I’m not good?’ but especially now that I’m going to be a teacher, I have the skills to teach, so it kind of goes hand in hand,” McCleery said. “I haven’t really talked much with my coach about it yet; I don’t know if I’m going to help her or start my own thing.”