What to watch for in Panthers’ exhibition 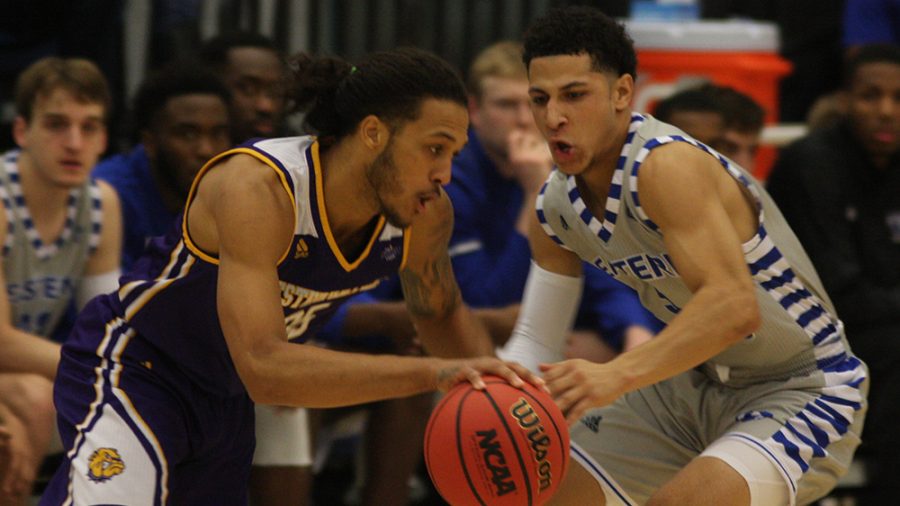 Eastern guard Shareef Smith guards a Western Illinois player in Lantz Arena last November. Smith had 12 points in the game, which the Panthers won 68-66 in overtime.

While many are expecting a blowout, there are some things we can learn from the men’s basketball team’s exhibition game Wednesday night.

The Panthers host Missouri-St. Louis at 7 p.m. in Lantz Arena, and if last year is any indication, Eastern should blow out the Tritons (last year Eastern defeated Eureka College 79-44).

While a blowout may not be that exciting for the average fan, I will be watching (on the road to Washington D.C. on my phone) for these aspects I believe to be important for the team going into the season.

These two things I want to see from the team Wednesday are things I have mentioned before, but I feel that it is important to see how the team does with its offense this season.

Three-pointers are great, but not when they become the reliance for scoring on the offensive end.

Eastern found itself falling back on putting up the long-range shots when it was struggling to score last year, and part of that goes to the Panthers not having a solid post scorer.

As great as Aboubacar Diallo was at being an obstacle on defense, in the lane, he was not a scorer by any means.

Josiah Wallace and Mack Smith will be returning as Eastern’s leading scorers from last year at the guard positions, but there is not one returning player you can look at and decisively say is the go-to guy in the post.

JaQualis Matlock looks like he could be that guy this year, and if that is the case, he will have to bring the intensity all season long.

At the start of last season, Matlock struggled scoring inside on post-ups, but as the season went on, he was a solid option for inside scoring.

Rade Kukobat is the tallest player on the roster this season at 6’ 9’’ but scored better from the outside and with mid-range jump shots last season.

So, while it will likely be a blowout game Wednesday evening, if I would see someone dominate in the post, I would take it as a good sign going forward.

I am not talking so much about what type of defense the Panthers will run, as much as I am about if the defense will just simply be better.

In an interview with Eastern play-by-play announcer Mike Bradd at OVC media day Oct. 22, Eastern head coach Jay Spoonhour said his goal in recruiting in the offseason was to get players who were good defenders.

Last season, Eastern got beat off the dribble too much, and when opposing ballhandlers beat an Eastern defender on the perimeter and got to the lane, the Eastern defense struggled and was susceptible to getting scored on a lot.

Spoonhour said he was looking to cut down on the defensive lapses from last year, and Wednesday will be a great way to see how the new players to the roster help the defense.

The ideal defense for the Panthers to run would be the hybrid man-to-man/zone 1-3-1 defense it adopted later in the season last year because it helped them not get beat as much and when they did, they were able to recover better.

But, regardless of whether or not they use man-to-man or zone, the defense has to get better this year, and Wednesday will be a good reference for the start of the season to see how the defense is different (if at all) this year.