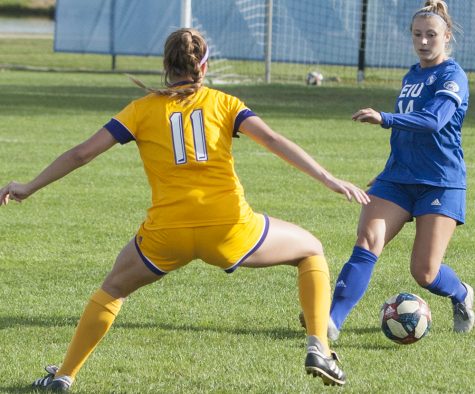 The Eastern women’s soccer team finalized their admittance to the OVC conference tournament this weekend for the second straight year, in which they tied Austin Peay 1-1 Oct. 25 and lost 1-0 to second-seeded Murray State on Sunday.

Not since the 2010 and 2011 seasons has Eastern qualified for the tournament in consecutive seasons, losing to Morehead State in the semifinals before collapsing in the opening round to Tennessee-Martin the following year.

As the eighth seed, the Panthers will have to grapple with Tennessee Tech in the opening round of the OVC tournament, set to begin on Nov. 1 at Corte Stadium in Carbondale.

Eastern Kentucky, Morehead State and Eastern were caught up in a marathon for the eighth seed in the standings.

So long as Morehead State did not come out of its final match against Southern Illinois Edwardsville with a win, the Panthers could all but guarantee that the monopoly they have held over the eighth slot in the conference was secure.

Eastern Kentucky, having already played 10 matches going into the weekend, carried the burden of waiting for the results of the Eastern and Morehead State matches.

Junior Haylee Renick provided some comfort for the Panthers via a goal off an assist from junior Itxaso Aguero to go up 1-0 on the Governors midway into the first half.

It was the first goal the Panthers had scored on the road against a conference opponent this season.

Earlier in the half, Sara DeWolf drove one to the lower left of the net that was saved by Austin Peay goalkeeper Mary Parker Powell, followed by an on-target, but low, shot from Renick about 30 minutes into the match.

Austin Peay’s Ashley Whittaker evened the score with just over five minutes left in the match which, in spite of two shots on goal by way of Itxaso Aguero in the second overtime, remained deadlocked at one goal apiece.

To close the weekend, and the regular season itself, Eastern fell to the Racers on sophomore Abby Jones’ first half goal, her sixth of the season and the 14th in her collegiate career.

The Panthers nearly decimated the deficit in the last 10 minutes of the match, but DeWolf’s chance on goal was blocked and Iguero’s went wide of the net.