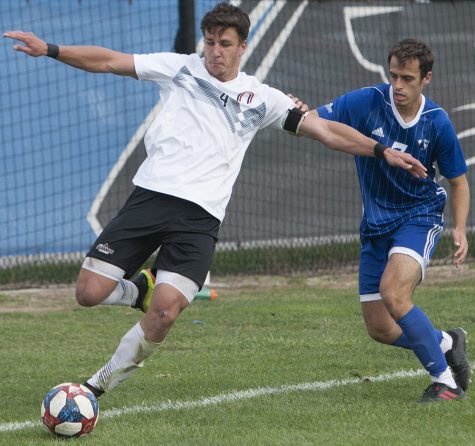 The men’s soccer team hoped to take control of its  spot in the Summit League standings and spoil Western Illinois’ senior night Oct. 26.

The Panthers were not able to do either in a 2-1 chippy conference loss against the Leathernecks that saw five cards, which included one red card, go to the Panthers.

Eastern’s offense might have taken the first shot of the game, but Western delivered the first score.

In the 13th minute, Eastern turned the ball over to Western’s leading goalscorer Ryan DeBois, who shot the ball into the back of the left corner of the net to make the score 1-0. The goal was DeBois’ sixth goal in 2019.

Eastern’s defense faced seven shots with only two being on goal. Redshirt junior goalkeeper Jonathan Burke recorded one save in the first half.

Eastern’s offense took three shots with one of those going on goal in the first half. Redshirt sophomore Luke Kurili recorded two of the three shots, including the one that was on goal.

In the first half, the game saw two of seven total cards. Redshirt sophomore Cameron Behm and Western’s Cameron Territo each received a yellow card in the first half of the game.

Burke recorded three saves in the first 10 minutes of the second half. In the 67th minute, Eastern’s defense allowed Western to score off a double-assisted corner kick goal to make the score 2-0.

The Panthers got on the scoreboard in the 71st minute. Behm assisted junior Davi Girardi’s second goal of the season that made the score 2-1. Girardi took six shots in the entire game.

The assist was Behm’s fourth of the season and currently puts him in a three-way tie for third-place on the Summit League assists list.

In the 72nd minute, junior Shady Omar and Western’s Arian Mehrang were both ejected as a result of a red card.

As a result of the red card, Omar will face a one-game suspension and will miss Eastern’s next game against Fort Wayne.

Burke finished the game with six saves, bringing his season total to 63. Burke is in third place in saves and save percentage, and he is in fourth place with a goals against average of 1.59.

The Panther offense outshot Western in the second half with 11 shots to Western’s seven. Western outshot the Panthers for the game with 15 shots, eight of which were on goal, compared to Eastern’s 14 shots, with only four on goal.

The Panthers’ record dropped to 4-8-2 on the season and with the loss drop to fifth place in the Summit League standings.

Denver recorded a win against Omaha to gain a two-point lead over the Panthers for fourth place.

Denver and Eastern both finish their conference season against Fort Wayne. Fort Wayne is 0-3 in conference play this season.

The men’s soccer team will face Fort Wayne in their last conference match of the season Saturday.