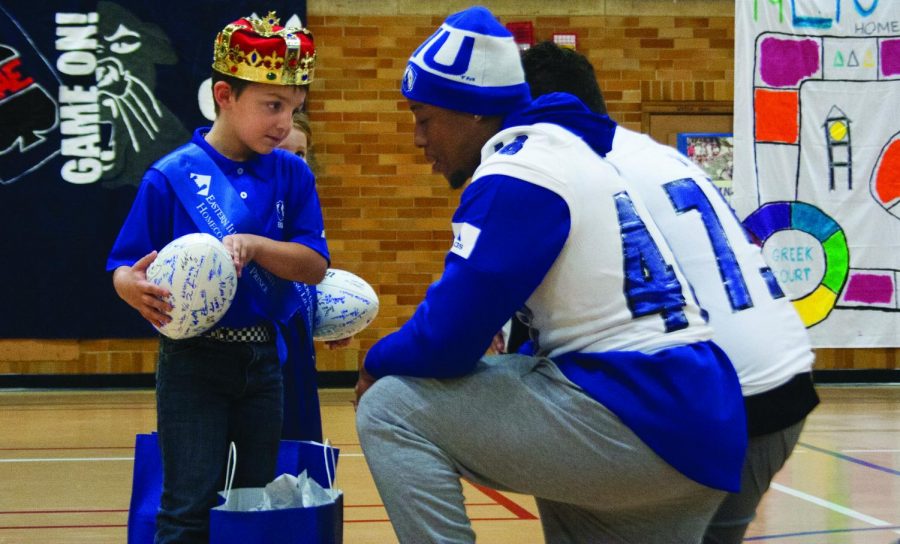 The 2019 Homecoming Court was announced at the Homecoming pep rally Thursday evening.

The 2019 Faculty Homecoming King and Queen was John Willems and Lauri DeRuiter-Willems.

The 2019 Little Prince and Princess are Mason Koehler and Sofie Reifsteck.

Britton said she enjoyed the moments leading up to coronation

“I’m really excited, I’m really grateful to have the support system that I have, all of my family and friends that supported me. I’m just really happy,” Britton said. “The best part was campaigning and getting out there and getting my name out there and making sure people knew who I was and who I represented.”

McClarien said he was surprised to hear his name called for Homecoming King.

“I’m really happy. I didn’t know I was going to win and I can’t stop smiling from ear-to-ear, McClarien said. “This is really surreal. This is my second year here and to actually be Homecoming King my second year at Eastern is really tremendous for me.”

McClarien said he liked being around the other candidates.

“The best part of Homecoming is just the energy of everybody and all the support from everybody who was running for prince, king, queen princess,” McClarien said. “This weekend I’m looking forward to a W from the football team, I’m really hoping that they win not just because this is Homecoming but also to get the feel of Homecoming on campus as a king.”

“I was really surprised, I’m not going to lie, I know that 60 percent of it was the interview so I know that I did okay in the interview but if anything I’m just really glad that I had all of my friends and all of my people supporting me because at the end of the day it’s all about representation,” Argueta said.

Argueta said what she is looking forward to the most is representing her peers.

“I’m really excited for EIU and the rest of the year in because like I said I decided to run because I wanted to bring representation to my people, to EIU and my Latinx students out there and now I’m just really excited to see what I’m able to do now that I was crowned princess,” Argueta said. “I’m really excited that I have this title and that it’s not for popularity, but it is to make a difference and that’s what I want to do.”

Abdoulaye-Pedila said she was happy to see a diverse court.