Eastern to face Colonels for Homecoming 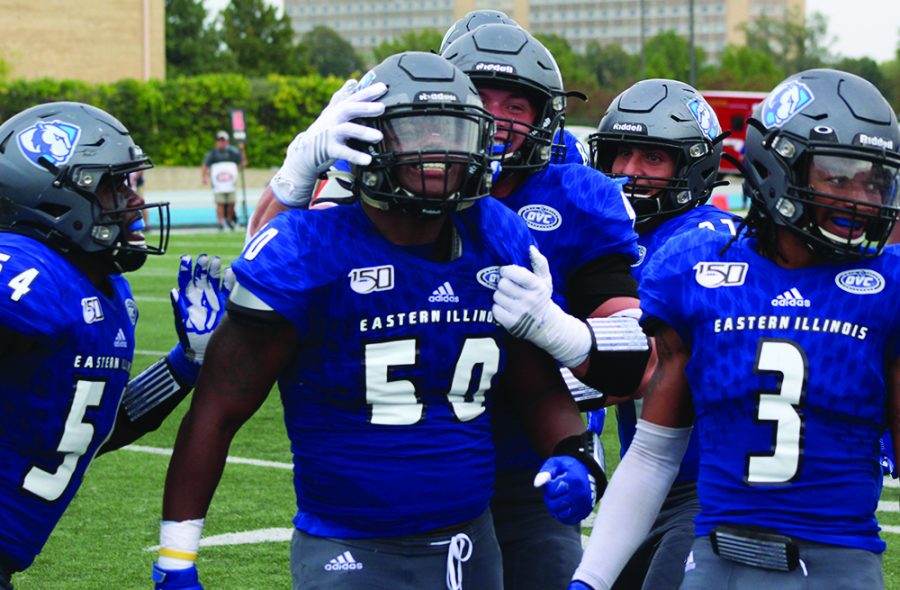 Sean Williams (middle) has teammates gather around him to celebrate after making a play. Eastern lost 40-29 against Tennessee Tech Sept. 28 at O’Brien Field.

It is no secret what Eastern Kentucky will do on Saturday against the Panthers at O’Brien Field: The Colonels are going to run the ball, a lot.

There will be no gimmicks, no flashy or hip 2019 plays; Eastern Kentucky is going to run the ball hard and run the ball a lot, which is exactly what the Panthers expect them to do.

If the Panthers want to pick up their first win of the season Saturday, in front of a Homecoming crowd, they are well-aware that controlling Eastern Kentucky’s ground attack will be crucial.

“Good teams have tendencies and good teams have an identity and they certainly have an identity on offense,” said Eastern head coach Adam Cushing. “So, we have to have our most physical game of the year, that’s the bottom line. You want to beat a team that wants to run the ball that many times, you have to step up your physicality.”

Cushing and company know what to expect against the Colonels, the question is can they stop the run game and more?

Here are the three keys to Eastern’s homecoming matchup against Eastern Kentucky:

Eastern Kentucky’s marquee running back, McCleskey, is a scary one. He leads the conference in rushing yards and is second in yards per attempt (6.8).

Cushing said that McCleskey might be the most complete back Eastern will see this season and quipped, “What doesn’t he do (well)?”

“He is a really good back, he’s physical, he runs the football the right way,” Cushing said. “He has an attitude that when he gets his hands on the football he is either going to punish somebody in his way or he is going to score a touchdown. And that is really fun to watch. And the scary part is if you give him enough space he can shake you too.”

McCleskey will not be alone, and has not been alone, this season in punishing opposing teams.

Booth is a much different challenge than McCleskey. At 6-foot-1 and 250 lbs, Booth is 60 lbs heavier than McCleskey and offers teams no time for relaxation when McCleskey comes off the field.

Turnovers have been an issue for Eastern all season long.

Giving the ball away to the other team, whether by interception or by fumble, has been a plague to this Eastern football team which leads the OVC in interceptions thrown (11) and is second in fumbles lost (six).

The turnovers have led Cushing, on multiple occasions, to say that the Eastern football team has beaten itself in games this season.

Starting quarterback Harry Woodbery has been responsible for throwing 10 of the Panthers 11 interceptions this season, the second-highest figure in FCS football, and the Panthers know putting him in positions that can limit errant throws is going to be key the rest of the season.

Part of the discussions with Woodbery, whose competitive nature can often have him trying to do too much, have been letting him know it is okay to punt the ball or kick a field goal.

“It’s been talking (to Woodbery) about ending every drive in a kick, a punt is not the worst play, you know it’s really not,” Cushing said. “Obviously a couple of those (interceptions) were in the red zone or even on the goal line or in the end zone, so one of those kicks is huge it’s good points for us.”

What has not helped Woodbery’s interception total is the fact that Eastern has often been playing from behind this season, forcing Woodbery in high-volume passing situations, but still, the Eastern coaching staff has tried to let him know he does not have to make every throw or every big play.

“(Woodbery) is such a competitor, he wants to make a play on every single play,” Cushing said. “He believes that he is going to score a touchdown on every throw that he makes, and you love that about him. But you just have to get him to understand what the ramifications (are) and sometimes the pendulum swings a bit too far when you do stuff like that.”

Cushing added: “So, it’s just coaching him up on little things and saying that, ‘Yeah we talked to you a lot about not taking a sack, but when choosing between a sack and an interception, a sack is not the worst thing in the world,’ so it’s just being more conscious of how important the football is.”

Again, Cushing mentioned how in the beginning of the season the Panthers were not moving the ball well, which may have put Woodbery in some live or die situations. But Eastern is moving the ball more efficiently now, which should take Woodbery out of that mode.

It is possible that the OVC’s two most dangerous pass rushers will be featured in Saturday’s game: The Panthers’ Dytarious Johnson and Eastern Kentucky’s Aaron Patrick.

Both teams will be very aware of where the opposing pass rusher is at all times Saturday.

“We have to know where (Patrick) is,” Cushing said. “He will play a little bit on both sides, so you know they do a good job of moving him, it’s kind of based on what personnel is in the game for them, so we have got to be conscious of where he is.”

Cushing said Eastern’s offensive line is going to need to utilize “all the tools in their tool belt” to limit the damage Patrick can inflict in the backfield.

“It just goes down to winning your one-on-one matchup,” Cushing said. “He is a heck of a football player, but he is not Superman. We have to go out and just trust ourselves, truly, because we have got guys that have just gotten better and better throughout the year in terms of pass-protection on the edge and we just have to do a great job of trusting ourselves and not worrying about this guy being that much drastically different, as long as the rest of our plan as a coach is in place and then we can have those guys go trust themselves.”

Eastern and Eastern Kentucky kick off at 2 p.m. Saturday at O’Brien Field.