Organizations battle it out at spelling bee 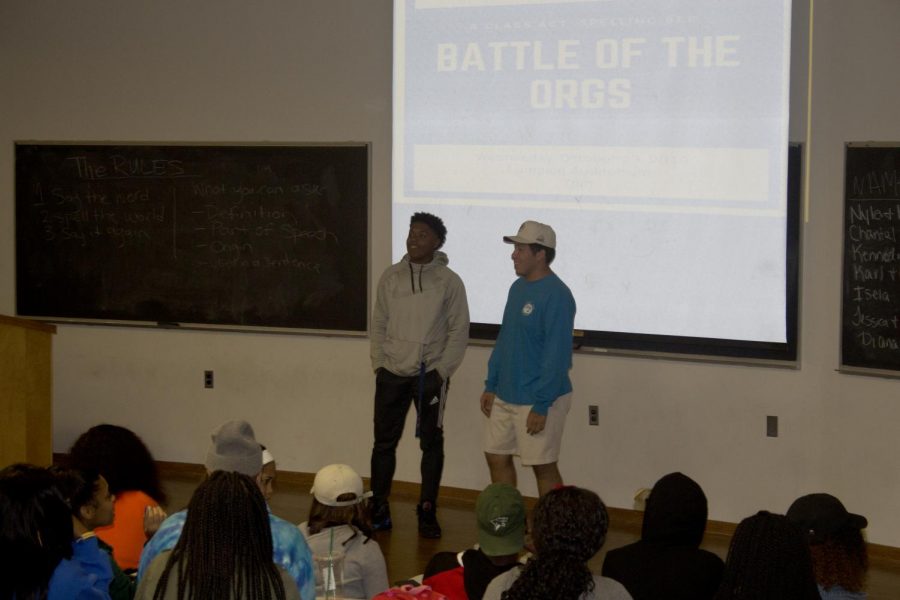 Karl Webber (left), a junior political science major, and Cristian Melgoza (right), a junior corporate communication major, participate in “Battle of the Orgs” on Wednesday evening in the Coleman Auditorium. Webber and Melgoza are part of Sigma Phi Epsilon and had to spell out words as part of the battle.

Members from various organizations on campus went head to head in a spelling bee Wednesday in the Coleman Auditorium.

“Battle of the Orgs,” which was hosted by the Black Student Union, was organized to bring different organizations together.

The winner of the spelling bee received 25 dining dollars.

Both women battled it out until the judges of the spelling bee declared it to be a tie.

Davison said she was happy to be one of the winners.

“I wanted to represent for BSU, but I have also always been really good at spelling,” Davison said.

Kip Beach, a senior management information systems major and secretary of BSU, said they wanted to think outside of the box and host an event like a spelling bee.

“It’s a great way to bring different organizations and challenge people to see who can really spell,” he said.

Bryan Melgoza, a junior marketing major and member of Sigma Phi Epsilon, said he came to support his friends that were competing.

“I came to show support to all the other organizations here at Eastern. Eastern is diverse so it’s really great when different organizations get to come together,” Melgoza said.

“I came to get more involved with organizations and support them,” he said.

Webber said that when he was on stage, he felt nervous but calmed down when he got off.

Diana Argueta, a sophomore graphic design and Spanish major and president of the Latin American Student Organization, was another contestant in the spelling bee.

“I came to the spelling bee because I wanted to start a connection with BSU as president of LASO,” she said. “I wanted to build that skeleton for us to work together in the future.”

Argueta said that she had mixed emotions on stage.

“On stage I felt empowered. It was nice but I did feel a bit nervous,” she said.

However, Argueta said she felt better when she was off stage.

“Off stage I guess I was just having a good time because everyone was just vibing and chilling,” she said.

Davison said she had mixed emotions both on and off stage.

“On stage I felt kind of nervous and doubting myself about spelling the words,” Davison said. “Off stage I was spelling other people’s words in my head.”

BreAnna Celestin can be reached at 581-2812 or [email protected]