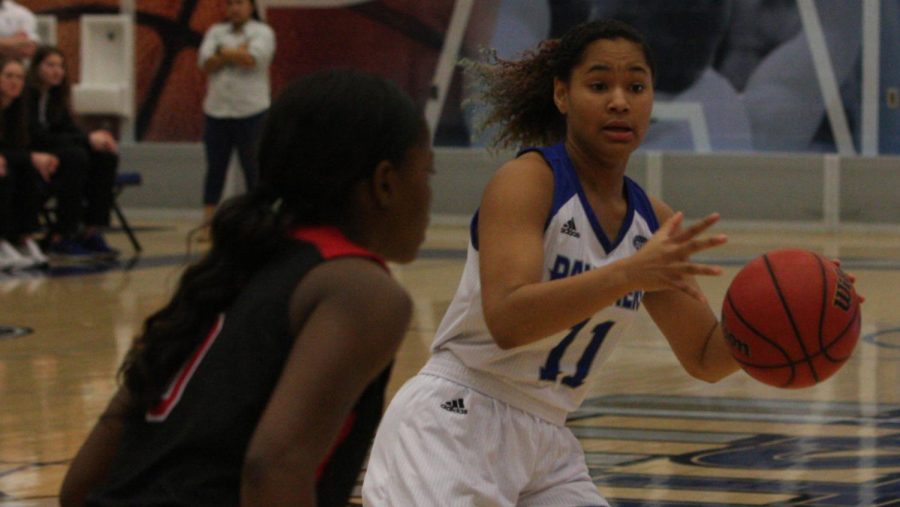 Eastern guard Karle Pace runs the offense in the Panthers' game against Jacksonville State Feb. 28. Pace had 13 points in the game, which Eastern won 52-49.

The Eastern women’s basketball team was picked to finish 10th in the Ohio Valley Conference preseason poll, and to put that ranking in the words of Tennessee-Martin head coach Matt McMillan, “that’s low.”

Although the 10th ranking out of 12 OVC teams does seem low, Eastern head coach Matt Bollant recognized that most preseason rankings are based on what a team did the previous season, and the Panthers’ 5-13 conference record a season ago did not exactly give the Panthers much merit in the polls this season.

But Eastern is returning four of its top five scorers from a season ago and is also welcoming a freshman class that includes a player Bollant says is the best open-court player he has seen in the program.

Four of the Panthers’ five starters have already been solidified headed into the season. Sophomore Kira Arthofer will start at point guard, juniors Karle Pace and Taylor Steele will play the other two guard positions and Abby Wahl will be one of the starting forwards.

Pace (13.9 ppg) and Steele (11 ppg) return as the Panthers’ No. 1 and No. 2 scorers from a season ago, and as upperclassmen now, another jump is expected to come in their play this season.

Both Pace and Steele have seen a lot of the court since their freshmen seasons, which Bollant says gives them the look and feel of seniors on a court as just juniors.

“Karle and Taylor have led our team from the summer, they have started every game since they have been here and so they’re like veteran juniors. Some kids as seniors don’t play their freshman year; they’re like seniors as far as they’re playing, so just having those two on the floor (will be key),” Bollant said.

Pace and Steele’s ability to shoot the three ball will give the Panthers freedom to space out the floor and open things up inside for Wahl, who Bollant says could be one of the top, if not the best, forward in the OVC by the time the season gets rolling.

It is still unclear who will join Wahl in Eastern’s starting frontcourt, but likely it will be either sophomore Grace McRae or senior Jennifer Nehls. Both Nehls and McRae are coming back from minor injuries, and because of that Bollant has not ruled out the possibility of freshman Morgan Litwiller seeing important minutes on the court.

Arthofer may be the most interesting starter to watch this season, however. Bollant said she is the best defender on the team and has “solidified” her starting spot at point guard, but Arthofer has big shoes to fill in replacing Grace Lennox at the position, and how she does that will be a key narrative for the Panthers’ season.

Eastern has three freshmen on its roster and one transfer sophomore who will be ineligible to play.

Litwiller as mentioned above may see significant minutes at the forward position, but it is freshman guard Lariah Washington who figures to have the biggest effect on the court for the Panthers of the freshman group.

Bollant said Washington is the best open court player the program has had since he has been here.

Who is on the schedule?

Eastern’s non-conference schedule is significantly tougher than it was last season. It includes road visits to Illinois-Chicago, Lipscomb, Evansville, Omaha, and the annual Illinois compass tournament which features games against, Northern, Southern and Western Illinois. The Panthers’ road schedule also includes a date with Wisconsin on Nov. 26.

Regardless of who the Panthers play, the expectation from the opponents and from Bollant is that Eastern is going to play exceptionally hard basketball.

“It’s who I am as a coach, I want kids to work really hard, I want to play with great effort,” Bollant said. “I know a lot of teams say they do, and I wouldn’t necessarily agree with that. There is games last year where I said we didn’t play as hard as we can play and I think that is one of the advantages of having veterans is they know the expectation and I think you’ll see us play harder than our opponent day in and day out.”

“They have always been a problem for us to guard because they have been so skilled and been able to score from all different spots on the floor, with all different personnel, so that’s a challenge cover,” Pietri said. “And of course they beat us last year at their place.”

“First of all I see a coach in Matt Bollant that is one of the best coaches in the country. I followed his career for a long, long, time and Matt does an excellent job and he is in his process, he’s building that program to look like he wants it to look and anybody who has watched what he did at Green Bay and his success that he had, you know he is going to do really, really good things there.”