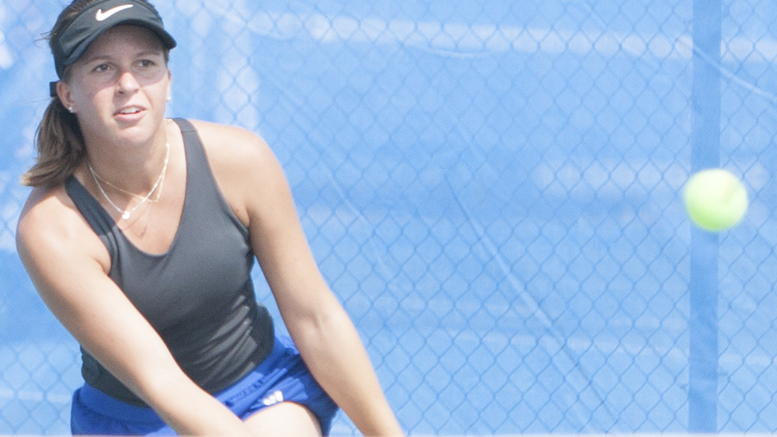 Dillan Schorfheide | The Daily Eastern News Elizaveta Bukraba-Ulanova slices a return hit to her opponent. Bukraba-Ulanova competed at the Eastern Illinois Fall Invite, which lasted Sept. 20 to Sept. 21 at the Darling Courts.

Rachel Papavasilopoulos won her opening round match against Akron’s Anna Ulanov 6-0, 6-2 as the women’s tennis team competed in the 2019 ITA Midwest Regional.

Papavasilopoulos, after winning in the first round, then played Notre Dame’s Ally Bojczuk to three sets, eventually losing 6-3, 6-7, 6-4.

Papavasilopoulos also played in a doubles main draw, being paired up with Gouws. The duo lost against Emilee Duong and Josie Frazier of Illinois 8-7 (4).

Contreras and Steven played as the Panthers’ other duo in the main doubles draw, losing their opening match 8-1 against Ava Markham and Antonela Stoica of Wisconsin.

Steven believes her team is continuing to improve as their season goes on.

“Honestly, we are all improving so much, and I think that is because we have such a high level of players and that makes practice more challenging and helps us improve from playing good players,” Steven said.

Gouws felt that her coach, Chris Tolson, was supportive during the matches.

“He believed in us, gave each of us some good advice during the matches,” Gouws said. “The team played really well, especially since we are not in our main season right now, and I’m very excited for conference season, we have a great team and It is only going to get better.”

The Panthers will play at Murray State Friday, Oct. 25 and Saturday, Oct 26.