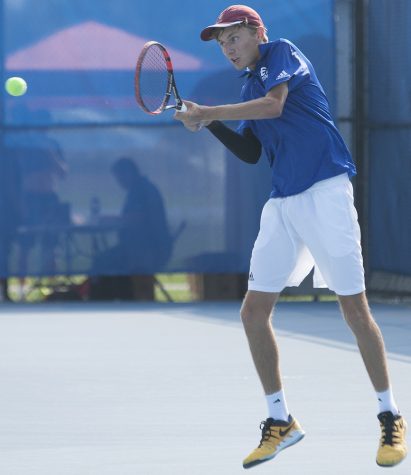 Freddie O’Brien kicked things off in the main singles draw of the 2019 ITA Midwest Regional with a win, something he is familiar with after playing at No. 1 singles all of last season.

But O’Brien quickly got back in the win column in doubles action racking up a win in the main draw playing with junior Mike Jansen. The duo won 8-3 over Marquette, before falling in the second round 8-5 to a seeded team from Marquette.

“It’s great having Freddie and Mike on the team,” head coach Chris Tolson said. “They are very talented, which leads to great practices for all our players. It’s great seeing them compete against some of the best players/teams across the nation.”

Both Jansen and O’Brien teamed up last weekend at the Louisville Fall Invite and won the doubles championship.

At events likes this, O’Brien says it is good to play good competition.

“It was a great experience playing at the event,” O’Brien said. “Great to meet some new big schools and play some real high-quality tennis.”

Junior Daniel Hernandez and freshman Christos Kyrillou did not have the result they would have liked, with both players suiting up as a tandem in the main draw in doubles play. Hernandez and Kyrillou found themselves on the losing end of their opening-round match, 8-7 (4) to Toledo.

Also, Hernandez and Kyrillou played together at the Louisville Fall Invite, and the tandem won their doubles flight title as well.

Jansen, Hernandez and Kyrillou also competed in the men’s qualifying singles draw, but again, the Panthers had some struggles.

On the bright side, Hernandez and Kyrillou won some singles matches in the consolation draw matches. Hernandez came out on top of Jack Santilli of Cleveland State 7-5, 6-1. Kyrillou defeated William Everett of Youngstown State 6-3, 6-2.

The Panthers will get a week of rest, before wrapping up the fall schedule with the Illinois State Invite, along with the Chattanooga Mocs Invite, both being played Nov. 1 through the Nov. 3.