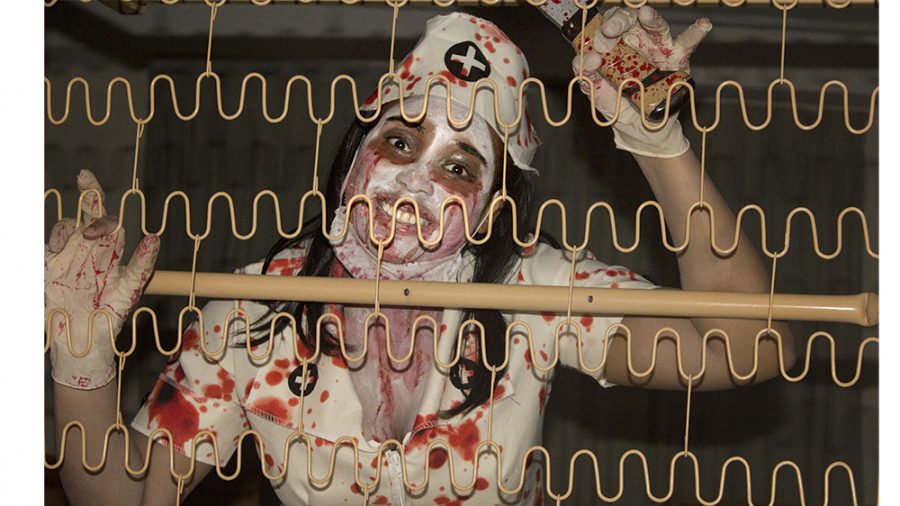 The house had over 450 attendees.

Imani Ryan, a senior FCS family services major and Pemberton Hall president, has been on the Pemberton Hall Council for three years and volunteered with the haunted house for a fourth year.

Ryan said she enjoys giving back the money they make from the haunted house.

“We love donating to HOPE, over the past years that’s just been who we’ve donated to as far as the haunted house is concerned,” Ryan said. “They really benefit from us donating to every year, it makes a huge difference so we love donating to it each year.”

Ryan said planning for the haunted house starts early in the semester.

“We start a month and a half in advance by coming up with themes and figuring out advertising and things and then we start to plan and start setting up on a Monday all the way till Friday when the house opens,” Ryan said.

Ryan said her favorite part of the Pemberton Haunted House was getting involved in scaring the people walking through the house.

“I get to take people through, watch people get scared when they ask me if the house is scary I just give them a look,” Ryan said.

It is a popular myth that a murder occurred in Pemberton Hall in the early 1900s and Ryan said she believes the rumors may add to the scare factor for some people.

“Because this is Pemberton and people do think it’s haunted a lot people ask if it’s haunted and I think they play it up in their heads and it makes it more scary,” Ryan said.

Olivia Davis, a freshman sociology major, said her belief in the supernatural played a role in her getting scared in the haunted house.

“I’m a believer in ghosts and stuff like that so overall all of the history that is behind (Pemberton Hall) is very intriguing,” Davis said.

Becca Nation, a freshman undecided major, said the rumors were part of the appeal of the house for her.

“I want to get scared honestly and I like the history behind (Pemberton Hall),” Nation said before going into the haunted house.

After going through the house, Nation said some aspects of the house frightened her.

“I got jump scared once, they just kept throwing things at me,” Nation said.

Some students were unafraid before going into the house.

Maddin Herberger, a sophomore sociology major, said he wasn’t concerned with getting too scared.

Davis said she wanted to attend because she has enjoyed haunted houses in the past.

“Overall I love haunted houses, they’re so much fun so I came to see what’s in there,” Davis said.

Davis said in the house she was so frightened she jumped into Nation’s arms.

“I do love jump scares, I won’t lie, while it’s happening I’ll be like ‘Oh my God, no,no,no’ but in the end it’s awesome,” Davis said.

Davis said another aspect of the house that she enjoyed was seeing her friends who volunteered in it.

“It was funny because we saw two people we recognized and we were like ‘oh, hey what’s up,’” Davis said.

As attendees left the house many of them were impressed with the house.

Davis said she is interested in being involved in the house next year.

“I might (volunteer) because I love haunted houses and I like being a part of them,” Davis said.

Nation said she would encourage people to attend the haunted house next year.