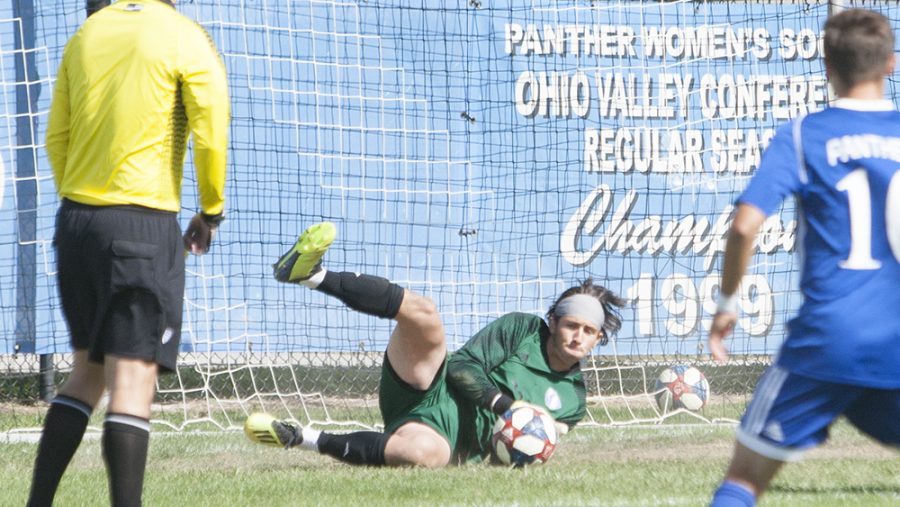 Dillan Schorfheide | The Daily Eastern News Jonathan Burke makes a diving save off a rebound shot, coming after making an initial save on a penalty kick. Eastern tied Omaha 0-0 Oct. 19 at Lakeside Field.

The men’s soccer team has had its fair share of highlight plays on defense and offense throughout the 2019 season.

The play redshirt junior goalkeeper Jonathan Burke made in the fifth minute of the match against Omaha Oct. 19 is arguably the best play yet.

Senior Edgar Mesa received a yellow card for pushing a player inside of the penalty box, giving Omaha a penalty kick.

As soon as Omaha’s Aaron Uribe kicked the ball Burke laid out and saved the first shot and then saved the rebound to set the tone of the game and the season moving forward.

This moment was a moment Burke replayed in his head the whole week leading up to this match and was very happy to step up when the team needed him.

“One of our sayings on our goal sheets is “You have your brothers back because he will have yours” there were instances throughout the game where this exact saying was shown,” Burke said.  “Each guy put their body on the line to get the result we did.”

The defensive back line, of Mesa and freshmen Quinn Rechner and Delphy Sabu, played a huge role in the game as well. For Sabu it was getting to his spots and able to move up in the attack as well as move the ball with.

For Rechner it was playing his warrior role for the defense since stepping on the field in 2019. For Mesa it was his tenacity, competitiveness and his desire to go out there and get the best result with his teammates.

“We showed up for the game today ready to go and knowing what was on the line for us,” Burke said. “Each of those losses although shouldn’t have happened we needed it to get hungry for this game and the games coming up.”

The result was what the Panthers needed in their last home game at Lakeside Field. Prior to the Omaha game the Panthers were on a three-game losing streak.

The Panthers finished their home play with a record of 3-2-1. Currently the Panthers still sit at fourth in the Summit League standings.

Moving forward the Panthers must keep their momentum building by continuing to play games like these where their urgency and competitiveness are at their highest levels. Two of their last three road games are conference play.

Western Illinois will be the first of the last three road games the Panthers will play in. Western Illinois currently sits in third place in the Summit League standings.

Western Illinois is four points ahead of Eastern in conference standing points.

“We bring the level of play every day and every practice,” Burke said. “It is the energy of the players and coaches that makes the environment what it is. Now that our defense has shown good things it is expected each game from here on out.”