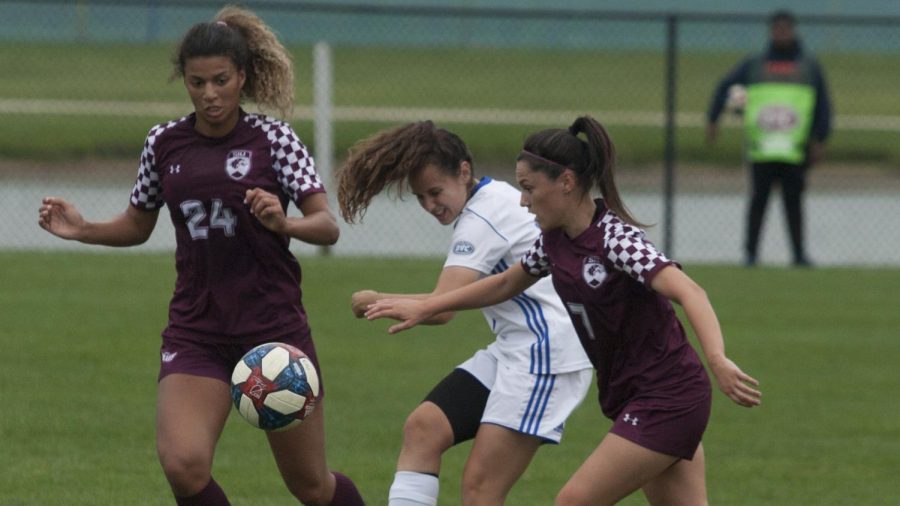 Eastern junior Itxaso Aguero clears the ball from a pair of Southern Illinois defenders on Oct. 10 at Lakeside Field. The Panthers and Salukis played to a scoreless tie.

If the Panthers could tie a leash around the eighth seed, so as to not let it out of their grasp, they would.

They might just have to wait awhile before they can take a deep dive into the footage of, say, Murray State or Southeast Missouri, the only two teams assured of a playoff berth.

The Eastern women’s soccer team has three games to prove that it belongs in the playoff mix, coming off a season in which they lost to Murray State in the semifinals of the Ohio Valley Conference tournament.

Their opponents over the final three games, however, could give them pause.

Eastern vanquished Tennessee Tech and Austin Peay quite handily last season, but the Panthers have not won a match against Murray State in six years.

Outside of Autin Peay’s moribund offense, the Panther defense will be forced to counter offenses that, between conference and non-conference play, produced much more efficiently this season.

Case in point, Murray State manufactured twice as many goals as the Panthers.

As a program, the Panthers have not secured consecutive playoff berths since the 2010 and 2011 seasons.

“We have been playing good the past weeks, but we don’t get comfortable, we want more,” Pilar Barrio said.

The Panthers are prime contenders for a tournament invite, stuck in the middle of a pack of five teams who each carry just as much potential to make the playoffs.

Both Morehead State and Eastern are tied for the eighth slot in the standings with two wins, while Eastern Kentucky, behind the Panthers and Eagles in ninth place, have won just as many games and enter the weekend on a four game losing streak.

Head coach Jake Plant could say, rather confidently, that the team’s fate will remain in flux for some time to come, even after the Panthers play Tennessee Tech on Friday afternoon.

Eastern, according to Plant, may not know as to whether or not they will be playoff bound until the final match at Murray State.

“Next Sunday we are all going to be looking at our phones immediately after the game,” Plant said.

“It’s like last year, with the same thing, we played Tennessee Tech and we won. We were positive after the win that we were in (the playoffs), but we did not know we finished third, though.”

Keeping the parallels in mind, he believes this group is in a more advantageous position than they were last season, based on his observation that the team’s confidence in themselves has swelled since then, discovering the character of his players in pressure situations.

Plant also underscored that his players completed what he considered the best week of practice he has seen all season.

“This is a team that if you look at two of the games that we lost in conference, they believe they should have won them,” Plant said.

“They actually know now that, if they hadn’t slipped up in those games, they could be vying for a title, but the reality is that they did lose those games, so now they are having to get themselves into a playoff situation.”