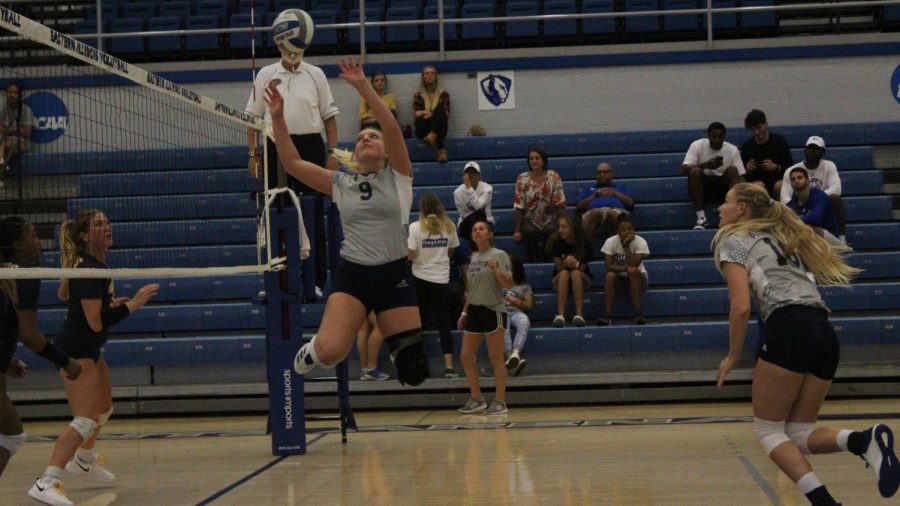 Eastern setter Bailey Chandler guides the ball over the net as teammate Maggie Runge makes her approach in the Panthers' match against Murray State on Sept. 27. Eastern lost the match in straight sets.

A 1-17 record and a winless start to conference play do not usually bode well for a team’s postseason chances.

The Eastern volleyball team finds itself in this position and is in last place in the OVC.

The Panthers have, at times, performed well this season. They have not been able to consistently remain at that level, however.

If you break the Panthers’ season in half based on performance, they averaged 11.74 kills per set in their nine best matches.

That number would be good for ninth in the OVC. The top eight teams make the postseason.

Kills per set is seemingly an effective way to measure playoff teams.

If you break it down even further and look at the Panthers’ five best performances, they are averaging 12.44 kills per set, which would be the fourth best in the conference.

However, in their worst five matches, they are averaging just 8.47 kills per set. A bigger problem for the Panthers is where these bottom five matches have been on the schedule.

Conversely, three of their best five performances came in the first three matches of the year. Only one top-five performance has been in the second half. It was actually the Panthers’ best performance in terms of kills per set this season and it was on Sept. 28 against Austin Peay.

Luckily for the Panthers, four of these performances have been at home. Of Eastern’s 10 remaining conference matches, six will be played at Lantz Arena.

Another possible positive for the Panthers is that they have played relatively well against strong competition.

Their only win of the season came Sept. 21 against a Robert Morris team that is 16-3 overall and 6-0 in the Northeast Conference.

The match in which the Panthers averaged their highest kills per set average, 14.67, came against Austin Peay, which had the best regular season record in the OVC in 2017 and 2018.

Although a postseason berth is unlikely for the Panthers, they can manage to have some positive results in they find consistency during the final month of the season.