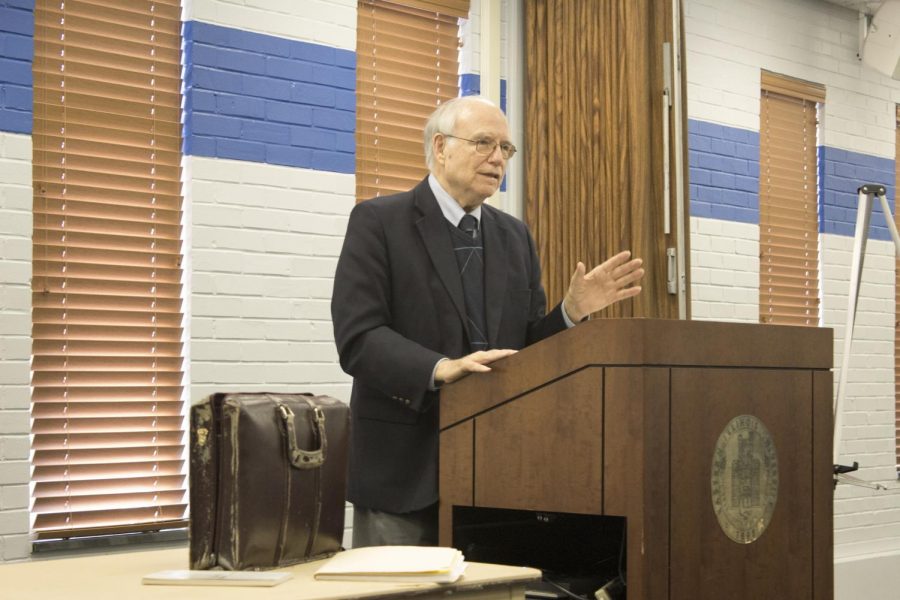 Charles Wheeler presents to the Eastern Illinois University Annuitants Association as the first speaker of the association’s speaker series Wednesday afternoon. Wheeler reassured retirees their pensions will not be cut.

Eastern retirees learned Wednesday afternoon that they do not have to worry about their pensions being cut anytime soon.

Wheeler, who is known for his following and coverage of state government and politics for 50 years, assured the Eastern retirees that their pensions would remain untouched.

The question on several minds Wednesday afternoon was the possibility of a constitutional convention that could change the law regarding state pensions.

Wheeler said in theory there could be a call for a constitutional convention, but the reality is that there will likely not be one until 2088, something Wheeler calculated himself.

He said retirees should not stress about their pensions being cut, especially after Illinois’ budget crisis from 2015 to 2017.

“We had two years without a budget,” Wheeler said. “Higher education took it in the ear horribly during that time, but the pension payments were made … you have to make the payment, budget or no budget.”

He said if lawmakers would have read article 13 section five of the Illinois Constitution, the section regarding pension and retirement rights, they would have not even bothered with trying to cut pension funding in the past.

The section of the Constitution states: “Membership in any pension or retirement system of the state, any unit of local government or school district, or any agency or instrumentality thereof, shall be an enforceable contractual relationship, the benefits of which shall not be diminished or impaired.”

“And that, my friends, is the law,” Wheeler said.

Another thing Wheeler said retirees should not worry about is the possibility of future taxation on retirement income.

He said the likelihood of that happening is slim.

“It’s probably more likely that I’m going to start at third base for the (St. Louis) Cardinals or the (Chicago) Cubs next year, and I’m left-handed,” Wheeler said.

If the retirees were to worry about anything, Wheeler said they should be worried about the pension debt.

“I guess if you want to look at public policy, you should probably worry about figuring out how to deal with the pension debt,” he said. “It would be nice if we could figure out a way to pay it off instead of scrambling and racking our brains.”

Wheeler also brought attention to the current day political climate, suggesting it is another worry for people to have.

“If you recall when you were younger, republicans and democrats could work together,” Wheeler said. “They would differ on things … but they always treated each other almost always with civility, with respect.”

Gone are the days of being friendly and cordial with one another despite political disagreements, something Wheeler said is one of the bigger problems these days.

“The whole nation was built on the concept of people working together to solve mutual problems, and bottom line is we’re all in this together,” Wheeler said. “When you split into these tribes it makes it more difficult to come to agreement.”