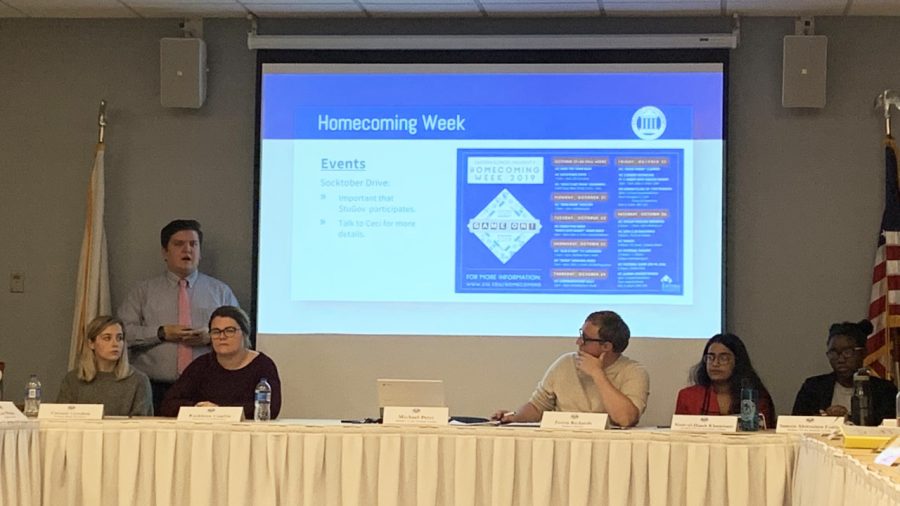 Student Senate explains details for homecoming week events for the next following week.

Student senators prepared for the “Socktober Drive” and “Pumpkin Palooza” events they have planned during the month of October during their Wednesday evening meeting.

Student Body President Carson Gordon led the meeting with updates on the mental health awareness events and tables set up around campus this week.

This update included a speaker from Life Links, a mental health clinic out of Mattoon, who spoke to students and faculty in the Grand Ballroom of the Martin Luther King Jr. University Union.

Gordon reminded senators that the “pin up a heart” board, meant to serve as remembrance of the lives lost to suicide or to spread messages of encouragement, will be available for students to add to and view in Booth Library until Friday.

Michael Perri, speaker of the Student Senate, reported on the “Socktober Drive” taking place throughout the month of October.

The nationwide drive asks for new, unworn socks to be purchased and brought to the Eastern homecoming parade on Oct. 26, to be picked up or dropped off at the Office of Civic Engagement & Volunteerism in the MLK Jr. Union on the third floor.

The East Central Illinois area has a “One Stop Community Christmas” event at Lake Land Community College in Mattoon. The socks collected by the Office of Civic Engagement and Volunteerism will be supplied to that event.

Student Body Vice President of Academic Affairs, Noor-ul-Haash Khamisani, reported on plans for the “Pumpkin Palooza,” where students will be painting pumpkins.

The meetings will be held every Monday at 7 p.m. in the Shelbyville room of the MLK Jr. Union.

Marcus Powell, Arcadus Nance, Luis Paniagua, Asher Roper and Yesensia Muruato were appointed to the Diversity Action Council at the opening of the meeting when the senators voted unanimously to approve the meeting’s agenda.

Pedila also reminded senators that the PRIDE student drag show would be taking place on Nov. 7.

Committee of Student Affairs chair, Skylar Coffey, reported that the committee is currently in the early planning process of two events: a hot chocolate and candy cane giveaway, and an “Ask Us Anything”-style table event.

The hot chocolate event will take place on Nov. 19 just inside the doors of Coleman Hall.

Coffey said the committee is looking into options beside simply hot chocolate, including coffee and tea, as she was made aware that some students would not be able to have the cocoa based on dietary restrictions.

The “Ask Us Anything” table event is not slated with a date or time, and those will be dependent on the schedules of the faculty at the center of the table.

Coffey said they are currently looking at the possibility of having Eastern President David Glassman, Interim Vice President for Student Affairs Lynette Drake, Director of Student Life Ceci Brinker or a few other known names on campus at the event.

She talked about the possibility of doing a social media live stream during the questions or recording it and sharing it online following the event.