Austin Peay is the team to beat in OVC 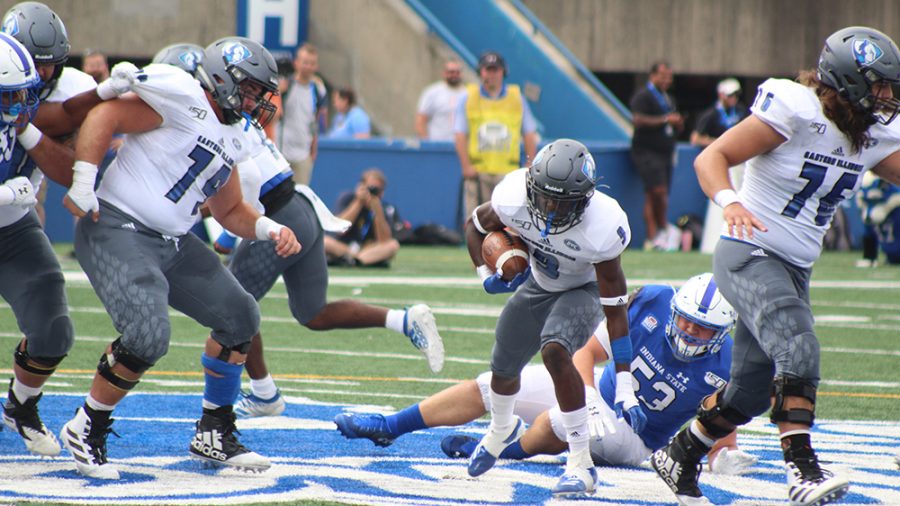 Adam Tumino | The Daily Eastern Runningback Jaelin Benefield avoids a tackle and breaks through the offensive line in Eastern’s 16-6 loss against Indiana State at Memorial Stadium.

Austin Peay might have, at least for now, solidified itself as the team to chase in the Ohio Valley Conference after beating Southeast Missouri 28-24 Saturday, moving to 2-0 in conference play.

It is not just Austin Peay’s beating of the Redhawks by four points that puts them in this position, but rather it comes just two weeks after the Governors drubbed Jacksonville State 52-33.

That means the Governors have beaten the two teams that were picked to finish first and second in the preseason poll in consecutive games.

Saying Austin Peay is the team to beat is meant in no way to disrespect Tennessee-Martin, the conference’s other undefeated team, but rather it is to highlight the strong resume Austin Peay has put together this season.

Tennessee-Martin, on the other hand, is still impressive with its 3-0 conference record, but its three wins do not carry nearly the same punch as Austin Peay’s. The Skyhawks blew out Murray State, and then beat Eastern Kentucky and Tennessee Tech in back-to-back weeks.

Just comparing resumes alone shows that Austin Peay has beat the better competition this season, but on top of that, the Governors have been a better offensive and defensive team than Tennessee-Martin this season.

Austin Peay and Tennessee-Martin play one another Nov. 9 in Clarksville, Tenn.

Jacksonville State took another blow to its resume, even though it came in the form of a win. The once-conference juggernaut narrowly beat a winless Eastern team 28-20 on Saturday and did not look like the team that once upon a time would have bullied a winless foe.

Jacksonville State needed a rebound game to prove it was still in charge of the OVC after losing to Austin Peay and beating Eastern by just eight points was not that game.

Murray State (4-3, 2-1) has a “prove-it” game Saturday against Eastern Kentucky (3-3, 1-1). The Racers are in third place in the OVC, but those two wins have come against the bottom two teams in Tennessee State and Eastern. Murray State also does not stand out on offense or defense, ranking fifth in scoring offense and sixth in scoring defense.

A win over Eastern Kentucky will show that the Racers may be a legitimate top half OVC team; a loss would not.