Threat to campus found to be not credible 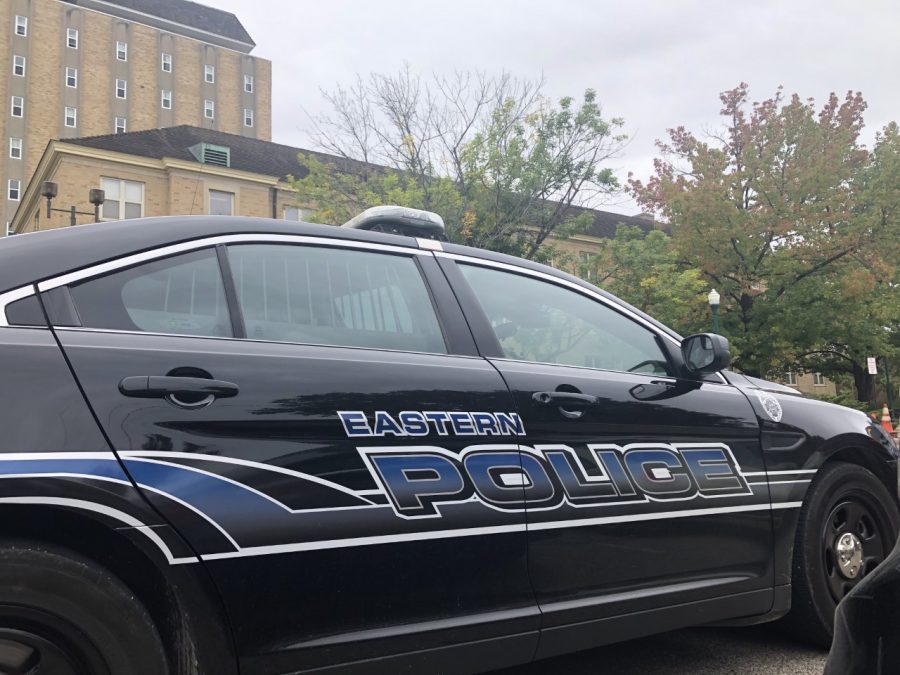 A police car sits outside Douglas Hall Tuesday morning after law enforcement responded to a report of a gun in the building. No gun was found.

A threat issued to Eastern’s campus early Tuesday morning was found to be not credible by law enforcement following a day of investigations, false alarm emergency calls and questions from a concerned public and student body.
9:48 a.m. Initial alert sent out
Eastern’s administration was informed via a crisis hotline that someone had issued a “vague” and “unspecified” threat to Eastern’s campus on Tuesday morning.

Eastern then issued an alert via the “Alert EIU” emergency system at 9:48 a.m., which said the University Police Department had “received a security threat to campus,” which was being investigated for credibility.

The UPD referred inquiries about the threat to Eastern’s media relations, which at the time would not confirm if police presence had been increased, but said safety was the school’s top priority and it was taking a “strategic” and “calculated” approach to the threat.

Classes remained scheduled, and the school did not go into lockdown procedure as the school believed the threat did not require any immediate safety action by students or staff.

University spokesperson Joshua Reinhart said the school would share additional details with the public as they could, but stated: “At this time, university leadership did not feel that such action was necessary at this time, but it is our top priority to keep everyone safe and we will maintain that vigilance of course.”

Students took to social media to react to the school’s initial security alert with a mixture of confusion and concern.

Some students were asking on social media why the school was not on lockdown. Others were circulating unfounded rumors. Some students skipped class, and some professors canceled classes in response to the alert.
11:35 a.m. Police respond to Douglas Hall
Police responded to an emergency 911 call from Douglas Hall at 11:35 a.m., treating it as a “10-32” code, which signifies a person with a gun. UPD Chief Kent Martin confirmed the dispatch was that of a 10-32.

Students were evacuated from the building and none were allowed in as the police cleared Douglas Hall of any gun-related threat. No gun was found, and students were let back into the building.

Martin was not made available for comment at any point during the day.

Eastern President David Glassman was not on campus Tuesday and Vice President of Student Affairs Lynette Drake also referred questions to media relations.
12:28 p.m. Threat no longer credible
Eastern sent out another message via Alert EIU that police had determined the threat issued in the morning was no longer credible and that no threat existed at the university.

“During the investigation, law enforcement was able to clarify statements made to the crisis hotline as well as identify the caller, and with that information law enforcement was able to determine the threat was not credible,” Reinhart said.
1:28 p.m. Glassman addresses threat
Glassman sent an email to all students Tuesday afternoon, four hours after the initial alert, confirming that a threat to Eastern was no longer credible.

In his message, Glassman said the school received a “very general and unspecified threat via cell phone call to a local crisis hotline.” Glassman said this threat provoked an “immediate investigation” by law enforcement.

“During this investigation, a subsequent report of a firearm in Douglas Hall was determined to be unfounded by the EIU Police Department,” Glassman said in his message.

Glassman said the safety of students, employees and the campus community is the university’s top priority and that is why the alert was issued Tuesday morning as a precautionary measure.

“Please know EIU takes a balanced and measured approach to determining the credibility of any and all threats to campus and its community,” Glassman said.