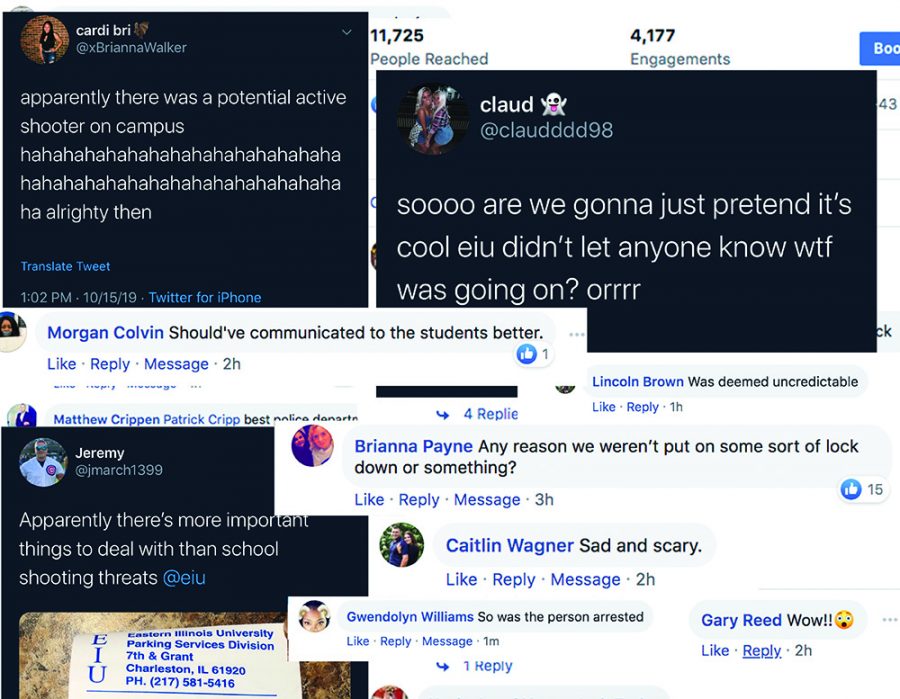 Graphic by Analicia Haynes | The Daily Eastern News The graphic illustrates several comments listed under The Daily Eastern News' post about police responding to a 10-32 dispatch (man with gun) at Douglas Hall as well as tweets regarding the whole incident. Students reacted to the threat on social media, some questioning what was happening and some perpetuating misinformation. There was no shooter on campus, there was no gun in Douglas Hall and there was no credible threat.

Richard Marrero, a junior history major, said when he was in class Tuesday morning, one of his classmates told him that there was a “potential threat” on campus.

That was the first time he heard about the threat, and his classmate stopped the class to tell everyone about it.

Everyone was confused and worried, he said, and one of his classmates brought his infant to class with him.

“It was on everybody’s minds,” Marrero said. “We were talking about it for a couple minutes, trying to see if there was going to be another email within the next couple of minutes. There was no details; it was, like, there’s a serious threat on campus, just be aware of something suspicious (and) call this number if you see something.”

On Tuesday morning, Eastern issued a potential threat to the campus community via Alert EIU.

Students, faculty and staff were supposed to receive a text or email stating that there was a potential threat on campus and the police were investigating it to determine its credibility.

However, there was no additional email from Alert EIU providing further information on the incident.

An email from Eastern President David Glassman at 1:28 p.m. recapped the entire situation.

Marcus Powell, a political science major and student senator, said he received a text from Alert EIU, but he said the message was “a little vague.”

He was in class when he got the alert, but his professor did not receive one and continued to teach as usual.

“I felt like if they got the report that it was a potential threat at school, then they should have told us to stay inside so that way there wouldn’t be anyone running around on campus and things wouldn’t have escalated,” Powell said.

Marrero said since there was no additional information released regarding the threat, that was part of the problem.

“Literally another sentence with detail would have been fine, but (the first alert) was so vague,” he said. “(The university) could have sent us a more detailed email. That’s the least they could have done.”

Dominique Dickerson, a senior sociology major, said the lack of details in the alert made her feel more scared because she did not know what was going on or what suspicious activity to look for.

“I do get not wanting to alarm the entire campus, but not saying anything alarmed us even more,” Dickerson said. “They could have (given) us reassurance that everything was under control, gave a description and location to steer away from.”

Morgan Colvin, a senior political science major, said part of the reason the university decided to be vague was because they did not want to blow the situation out of proportion.

However, because they did not communicate what exactly was going on, it backfired.

She said although she is subscribed to Alert EIU she did not get a text and had to search for the email that was sent out because it was sent to her clutter folder.

She said when she heard about the threat via a group chat, she heard everybody else saying it was an active shooter.

This was part of the problem, Colvin said.

“That’s why you have to try to provide as much information as possible and communicate effectively so that way people don’t go running around with assumptions of what is going on,” Colvin said. “I mean people didn’t go to class.”

And Colvin said when it was referred to as a “threat,” that was “so vague.”

‘What Could Have Been Done?’

Arcadus Nance, a junior criminology major and student senator, said he was in the library when he first learned of the potential threat.

He received a message from Michael Perri, the speaker of the student senate, in their student government group chat before he checked his own email where he found an Alert EIU message.

“Really my thoughts were since (the email) was so vague, I don’t know, I assumed that the circumstance was beyond a potential shooter; I thought it was something more of like terrorism,” Nance said. “I could honestly say I was a bit more afraid than I should have been because the email was subtle.”

Nance said the university should have provided more information to students, staff and faculty about what was going on, especially since he saw a video of officers running into Douglas Hall with assault rifles and did not know why.

Keeping the people informed should have been a priority so there would have been less worry throughout the campus and the day, Nance said.

“If you’re just out in the open and there’s a potential threat outside, I mean of course you’re not going to go outside, but when you’re outside anyway … that’s the issue,” Nance said.

“It all could’ve been avoided if they told us what was going on especially with all these things happening,” Colvin said. “I do believe (the university administration) were so focused on (the university’s) image that they were not concerned with the students’ safety.”

Powell said he did not know what was going on and just thought that since it was a threat that he should stay in a safe area.

“I know like in high schools if it was something like this that happened they would have gone under lockdown. Even if it was just to make sure there was no threat and it was OK,” Powell said.

Elishia Wright, a freshman psychology major, she was a little shocked because when she first came to campus someone said it was the safest in Illinois.

“Like a lot of this stuff has been going on, we’ve been getting a lot of alerts, so do I really feel safe here? Then I got another (alert) talking about how ‘oh it’s not really threatening,’ so I’m like ‘oh maybe it’s like a misunderstanding or something,’” Wright said.

Elizabeth Wood contributed to this article.