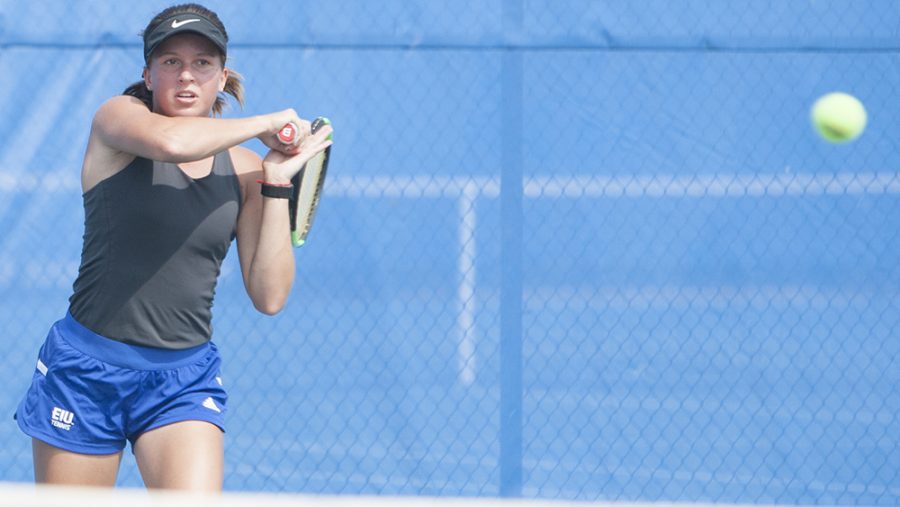 Dillan Schorfheide | The Daily Eastern News Elizaveta Bukraba-Ulanova follows through on a two-handed forehand return hit to her opponent’s court. Bukraba-Ulanova competed at the Eastern Illinois Fall Invite Sept. 20 and 21 at the Darling Courts.

The women’s tennis team hosted the EIU Panther Invite Oct. 11 and Oct. 12, and in the Flight B Doubles Draw, Lauren Ellis and Brittany Stevens won two of their three double matches.

The matches took place in the Lantz indoor field house Friday and on the outdoor courts in Mattoon Oct. .

“It was a lot of fun winning my matches with Brittany. That was our first time playing together, so it was a learning experience. However, I feel that we played really well together and progressed every match,” Ellis said. “We have similar positive and outgoing personalities so that helps to have in doubles on the court. We hyped each other up on good points and helped keep one another going.”

The two went up against their Eastern Michigan counterparts where they won 6-4. They then played against IUPUI where they lost 6-3.

To end the draw, Ellis and Stevens played against opponents from Missouri State and won 6-3.

“It always feels good to play at home, just because then we can play on our home courts and host other schools,” Ellis said.

In the women’s Flight A single match, freshman Brittany Steven lost to her opponent from Missouri State.

In addition to Steven, freshman Elizaveta Bukraba-Ulanova played in a Flight A match against her IUPUI counterpart, where she also lost.

In a Flight B singles match, freshman Esa Kavtaradez went up against an IUPUI opponent where she won 8-5. She then lost 8-3 against her Missouri State foe.

Ellis continued her success from doubles into her singles matches in Flight C, defeating an IUPUI foe 8-5. But she lost to a Missouri State foe 8-5.

“I feel like our team did well over the weekend. We had so many people come out with multiple wins and got to see many great teams,” Ellis said.

In the flight A doubles women’s draw, Bukraba-Ulanova and Kavtaradez played against IUPUI where they lost 6-1.

Ellis said the Panthers are working hard to improve their skills.

“I think our team is improving every day, and especially with every tournament,” Ellis said.

The women’s tennis team will participate in the ITA Midwest Regional Championship at Michigan State Oct. 17-20. Rachel Papavasilopoulos, Christine Gouws, Karla Contreras and Brittany Steven will be participating in the tournament.