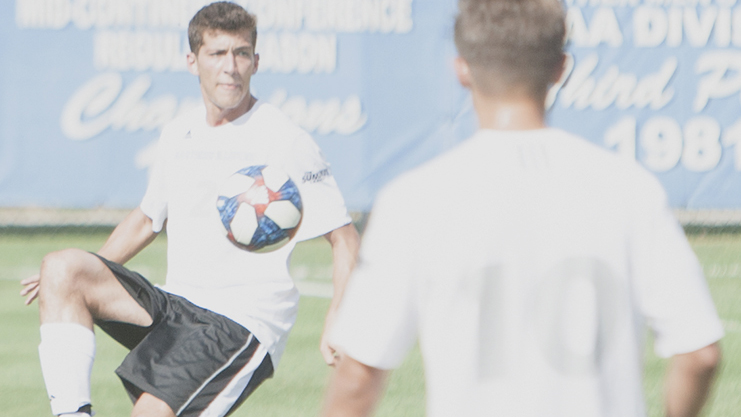 Dillan Schorfheide | The Daily Eastern News Edgar Mesa gets prepared to settle the ball out of the air, while looking upfield for an open pass. Eastern defeated IUPUI 1-0 Oct. 1 at Lakeside Field.

The men’s soccer team is coming off a tough interstate 5-1 loss to Northern Illinois from Oct. 8 to face Milwaukee Tuesday at home.

For Eastern the scoring came from Kris Luke. The goal was assisted by senior Alex Casteneda.

For Milwukee, the scorers came from Evan Conway and Suad Suljic.

Conway scored in the 18th minute of the game. Suljic scored the game-winner in overtime for Milwaukee.

In head coach Kiki Lara’s tenure the Panther’s have not won a game against Milwaukee. The Panthers, however, recorded a 1-1 overtime tie in the 2017 match.

Currently Milwaukee is 5-6-1 so far in 2019. Included in their win total are wins against Marquette and Western Illinois.

Overall Milwaukee has 14 goals scored as a team on the season, and four other goal-scorers have two goals: Evan Conway, Alex Sykes, Jake Kelderman and Matthew Cahill.

Milwaukee goalkeeper Freddy Lorenzen currently has a goals against average of 1.38. Lorenzen also has recorded 30 saves on the season.

In the game against Northern Illinois, the Panthers allowed four goals in the first half.

The Panthers recorded a goal in the first half when junior Shady Omar scored his third goal of the season. In the second half Northern Illinois recorded their fifth and final goal to make the score 5-1.

Anyone who has followed the team knows that the program is built on their constant ability to defend. It is seldom that the Panther defense allows five goals in a match.

After the loss the Panthers’ record went to 4-6-1. The Panthers currently sit in fourth place in the Summit League standings.

Eastern’s redshirt junior goalkeeper Jonathan Burke recorded three saves in the game. With the five goals allowed Burke’s goals against average increased to 1.69 on the season. That average is fourth in the Summit League.

Burke, so far this season, has recorded 46 saves and holds a save percentage of .708. Both are currently third in the Summit League statistics list.

Offensively, Omar’s three goals scored makes him the leading scorer for the Panthers.

Behm currently has three assists on the season. He sits in a four-way tie for third in the Summit League.

At home the Panthers are 3-1 at home this season. Their only home loss of the season was against Oral Roberts.

Oral Robers currently sits at the top of the Summit League.

The Panthers have scored eight of their goals in the second half of games in 2019.

Milwaukee is the same way in 2019. Eleven of Milwaukee’s 14 goals have came in the second half of games.