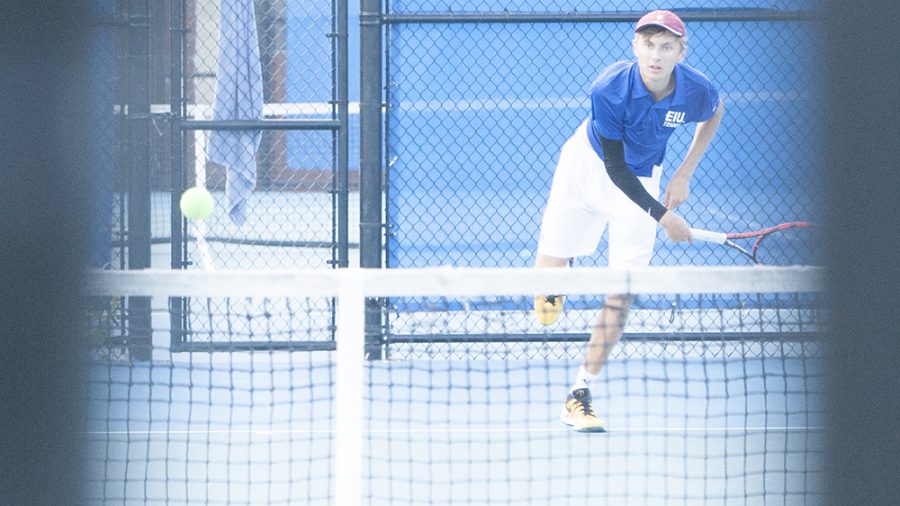 Dillan Schorfheide | The Daily Eastern News Max Pilipovic-Kljajic nails a serve to his opponent and completes his follow-through. Pilipovic-Kljajic competed in the Eastern Illinois Fall Invite Sept. 20 and 21 at the Darling Courts.

The Eastern men’s tennis team did not find a lot of success a few years ago.

But last year, and now this season so far, the Panthers’ success is starting to pile up.

The Panthers are coming off the Louisville Fall Invite and the Panther Fall Invite this weekend, and the spotlight was on junior Mike Jansen.

Jansen was magnificent in the Louisville invite, going spotless in both singles and doubles action for the Panthers.

Jansen topped it off to win the flight championship defeating Laurentiu Mandocescu of Youngstown State 4-6, 6-4, 10-5.

“I know I can beat (almost) all of them but can also lose to those guys,” Jansen said. “This keeps me focused throughout matches and helps me in practices to become better every day.”

“It definitely gives me the confidence when I play really good guys,” he said.

Jansen was not finishe; however, teaming with senior Freddie O’Brien in doubles action to win the Flight D doubles championship.

The pairing beat Kennesaw, before topping Ball State in the following round. Jansen and O’Brien eventually took home the doubles flight title against Youngstown State.

For O’Brien, he also walked away with two wins, in singles matches playing in the Flight C Singles bracket.

Thinking of the bigger picture, O’Brien said the team is coming together and likes the progress of the younger guys.

“It was a pretty solid weekend for us all, was great to see the younger guys getting stuck in and producing some good results,” he said. “It’s always difficult coming in as a freshman as you don’t have any experience in college tennis, but the guys seem to handle the pressure and the occasion well.”

Eastern was not done, though, as the team of junior Daniel Hernandez and freshman Christos Kyrillou claimed the Flight E doubles championship recording a 3-0 record.

Before the matches, Charbonneau’s focus was doing the big things right.

“I feel like the biggest thing that went well for us was our mentality,” he said. “We got hit by a lot of small things that were unpleasant or not the best circumstances, but we didn’t let it affect us. For example, we started each day of the tournament at 6:30 a.m. or 7 a.m. in some cold weather even though each night we wouldn’t get back to where we were staying until 11:30 p.m. or so. We had guys still on the court at 11 p.m. some nights.”

Charbonneau was also pleased with how Riera responded in doubles action.

“Pau did great this weekend,” Charbonneau said. “We were tight in the first match and pulled through then really got into a groove. Pau showed a lot of talent and potential this weekend and it makes me excited to see what he’s got as the year progresses.”

Moving on to the Panther Fall Invite, freshmen Thomas Wallace advanced to the finals flight B singles, notching wins of 8-2 and 8-4. But he showed no remorse, relishing off a win against teammate, senior Gertjan De Wilder, on his way to the title match.

But Wallace came out on the losing end in the finals to Pavel Badaiants of Saint Louis, 8-0.

Wallace also was featured in doubles play with sophomore Luka Knieling, proceeding to the finals before losing to Saint Louis, 7-5, while freshman Kyle Burton marched his way through the Flight C consolation draw to win and had one additional match in the Flight B draw.