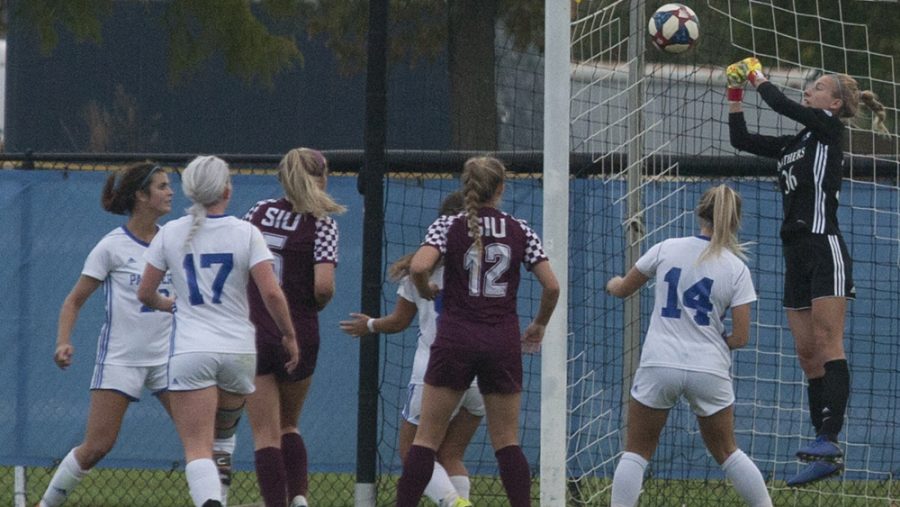 Dillan Schorfheide | The Daily Eastern News Sara Teteak rises up and punches a cross away among a sea of players. Eastern tied 0-0 with Southern Illinois Oct. 10 at Lakeside Field.

As it stands after a weekend overtime loss to Southern Illinois Edwardsville, Eastern women’s soccer sits in a tie for seventh in the OVC standings, currently slotting them as a low seed in the conference tournament at the beginning of November.

When asked what he will be pushing to his players ahead of a tough weekend slate, head coach Jake Plant said, “Compete, compete, compete. That’s what we know.”

Eastern finished last season with 15 points and managed a third seed in the tournament, and the maximum number of points the Panthers can accrue this year would be 16, but the road to that figure is challenging.

Tennessee Tech’s lone conference loss of the year came in a 1-0 hard-fought defensive battle against Belmont, and the Golden Eagles boast a 3-0 win over reigning OVC champion Murray State as well as a 2-1 comeback win over Austin Peay in the final seven minutes of regulation.

The Golden Eagles were projected to finish eighth in the conference during the preseason, three slots behind the Panthers at No. 5, but have exceeded expectations to this point, ranking third overall.

On top of that, Murray State plays host to Eastern this year, and the Panther defense will have to be stout considering that the Racers average 3.17 goals per OVC match this year.

Austin Peay is the regular season closer for Eastern, and the Governors, along with Morehead State (4-10-1, 2-4-1 OVC), are tied with the Panthers in the conference standings.

The good news for Eastern is that Austin Peay and Morehead State play each other Friday at 4 p.m., but the bad news is that ensures one of those teams will receive three points and potentially jump the Panthers if they lose or tie.

The key for the last three matchups will be the team’s discipline and focus, and those two facets have come to a strong point as Eastern has posted multiple-goal games in each of its last three conference matches and leads the OVC with the fewest fouls as a team.

The overtime loss to Southern Illinois Edwardsville may end up being a blip on the radar for the Panthers, but if they get too complacent late, they may find themselves out of the postseason picture come November.

The matchup with Tennessee Tech is scheduled at Lakeside Field on Friday at 3 p.m.