Eastern students share their stories of coming out to family, friends 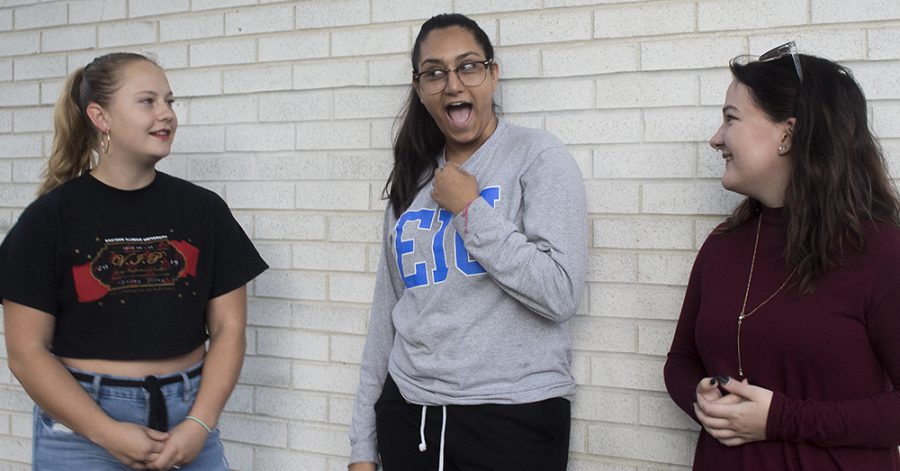 Elizabeth Houk (left), a sophomore graphic design major, Fatima Estrada (center), a sophomore with an undecided major, and Grace Osborn (right), a junior biochemistry major describe each other’s personalities Wednesday afternoon outside of the Tarble Arts Center. Osborn was describing Estrada’s personality and said she was amazing even though she denies it, causing Estrada to grab her collar and gasp.

Oct. 10 is National Coming Out Day as a part of Gender and Sexual Diversity History Month.

“Coming out” is a term for when a LGBTQ+ person tells their friends, family or the general public about their identity.

It first became prevalent in the ‘60s and was used to describe the action of joining local gay culture and activities.

Today, coming out is rarely a singular event.

LGBTQ+ people usually have to tell many people in their lives about their identity at different times.

However, most have one event that sticks out to them, whether it is the first time they came out or the most interesting story.

Grace Osborn, a junior biochemistry major, remembered coming out to her mother.

“I came out on Oct. 10 of last year on National Coming Out Day and I was at a tabling event for Pride, and I just quickly took a picture in front of our rainbow door and sent it to my mom, only to then realize that she was at work and wasn’t going to see it until (4 p.m.) . It was probably 1 p.m. or noon,” Osborn said. “So, I had like a man-made panic attack in class all day and then she texted me ‘Yeah, that’s fine, I already kind of knew.’”

Sam Hennegan, a sophomore double majoring in philosophy and English, came out to her family through food.

“I came out as a sophomore in high school, and I made pancakes that spelled out ‘I’m Pan’ and I made a slide show with myths and facts (about pansexuality) and I left the house and left it there,” Hennigan said.

Hennigan told her church pastor about her identity first.

“I realized at church camp when I was a little kid and was like ‘Ooh she’s cute.’ So, I actually told my pastor. She asked me if I had a crush on anyone, and I said, ‘Yeah, this girl.’ My pastor was cool about it, she was kind of like ‘Yeah, okay. Tell me about her,’” Hennigan said.

Despite this early realization, it was years before Hennigan really understood her own identity.

“I kind of forgot about that crush and pushed it aside. In middle school, probably eighth grade, I had another crush on a girl, and I was like, ‘No, that’s not okay, I can’t do that, it’s wrong.’ So, I told myself that the next guy I saw, I would date, and so I did,” Hennigan said. “Nothing really happened, we didn’t even kiss. We broke up after two months because he said ‘I love you’ to another girl. A couple of years later, I found out that he’s gay. We were each others’ beards, and we didn’t even know about it.”

“Beard” is a slang term for an opposite-gender person that a gay person might date to intentionally hide their identity.

As it turns out, church camp is not an uncommon place for LGBTQ+ people to come out.

The game involved the last person standing to reveal details about themselves.

“I was sitting next to my other gay friend – we were already out to each other. Someone stood up and said, ‘I’m part of the LGBTQ community,’” Houk said. “We got excited, jumped up, ran across the room, I sat down, and realized I had just come out to everyone at church camp, including kids from my own church.”

For others, the act of telling other people about their identity is not as important as the journey of self-discovery they went through.

Alex Mullen, a sophomore mathematics education major, said he felt that his story is a series of these processes.

“I originally came out as bisexual in eighth grade, because I didn’t know anything else. Throughout the next two years, I fully realized that I don’t like guys, I only like girls, and then I came out as lesbian. My junior year of high school, I was like ‘Huh, I don’t feel like a girl. Why do I feel like this?’” Mullen said.

Throughout his freshman year of college, Mullen has come out as a transgender man.

“I don’t want these people to know me by my deadname, I want them to know me as Alex,” he said.

A trans person’s “deadname” is the name they had before they transitioned and chose a new name to match their gender.

Most trans people do not want others to have that information, and it is considered in the community to be extremely inappropriate to use that name for them.

Even though coming out has been a major facet of LGBTQ+ culture, an increasing portion of the community would prefer that the concept was done away with completely.

Fatima Estrada, sophomore with an undecided major, explained why she feels this way.

“All my friends made posts on Facebook about their sexuality, but I’m like, ‘Why do I have to announce to the whole world that I identify as pansexual?’” Estrada said. “No one who is straight has to make a post or anything like ‘I identify as straight.’ Why does the LGBTQ community have to come out? We’re just like everybody else and if we’re fighting for human rights and equality, we shouldn’t have to do that. We’re just here and we exist.”

Still, Coming Out Day is a convenient event for those who do feel the need to publicly announce their identity.

The Center for Gender and Sexual Diversity is hosting a Coming Out Day tabling by the Doudna Steps on Thursday from 10 a.m. to 2 p.m., and all students are invited to attend.