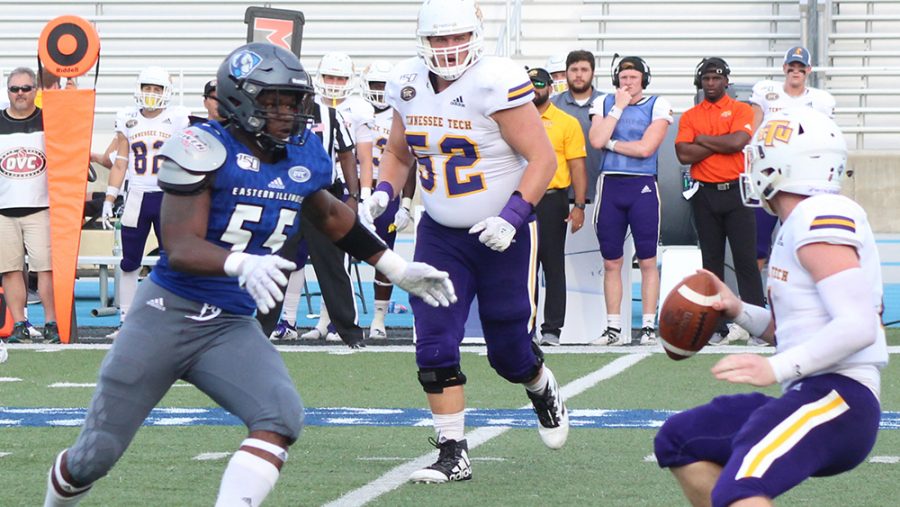 Adam Tumino | The Daily Eastern News Charlie Brooks chases down the opposing quarterback, as the quarterback tries to scramble to look for an open receiver. Eastern lost 40-29 to Tennessee Tech Sept. 28 at O’Brien Field.

The mantra for the Eastern football team (0-6, 0-2 OVC) has been the same all season: Focus on themselves rather than the opponent, focus on the task in front of them and focus on having all 11 guys on the field be in the right place doing the right thing.

This ideology has not changed based on how difficult of an opponent Eastern has come up against. Whether it be Indiana or Murray State, this has been the script Eastern has followed.

But as Eastern head coach Adam Cushing put it ahead of the Panthers’ game against the four-year reigning OVC champion Jacksonville State (3-2, 1-1 OVC), sticking to that script does not mean Eastern is naïve to the talent coming to Charleston Saturday… because Jacksonville State has a lot of it.

“(Jacksonville State) is a really good football team, they really are,” Cushing said. “They’re good across the board, they’re good at each position. There is a reason they have won the conference.”

The Gamecocks have been the top team in the OVC since 2014 when they rattled off a 36-game OVC winning streak that finally ended last season, and despite losing two of their last six conference games, they still pack a lot of punch and command a lot of respect from their opponents.

Saturday at O’Brien Field a winless Eastern team will take a swing at the perennial top dog of the OVC in Jacksonville State, and for better or for worse, Eastern’s young roster will get a taste of the conference’s most stacked roster.

Here are the keys to Eastern vs Jacksonville State.

How will Eastern handle Zerrick Cooper?

The Eastern defense already played against multiple dangerous quarterbacks this season. From Bailey Fisher at Tennessee Tech to Preston Rice at Murray State, there has been no shortage of quarterback talent facing Eastern this season.

But Jacksonville State’s Zerrick Cooper might be in a league of his own when compared to the other quarterbacks Eastern has seen this season.

Cooper, a transfer from Clemson, leads the OVC in passing yards per game (313.2), touchdown passes (16), yards (1,879) and is second in quarterback efficiency. His numbers speak for themselves, in other words.

But it is Cooper’s confidence in his arm that really stands out to Eastern.

“(Cornelius) said it very well, (Cooper) trusts himself,” Cushing said. “That comes with the amount of experience he has got certainly, but also his ability. He is a guy that can stand and make it look effortless and make a big time shot and make it look easy and then pull the ball down and make you pay with his feet.”

“You are talking about a really good football player who can stand and take a hit, he is a tough guy,” he said. “But as I have said all along, we have had tough quarterbacks all year that we have faced, so the challenge isn’t unique, he is just pretty darn good.”

Cooper has a lot of talent around him on the offense: Two all-conference linemen reside in front of him, with talent in the backfield, but his most dangerous weapon has proven to be all-conference, all-American, receiver Josh Pearson.

Cushing said there is no taking a player as talented as Pearson out of a game completely.

“We just have to contain him. Good players make plays. That’s the best part about Division I football is you’re going to keep seeing good players every week and they’re going to make plays because they are coached well and talented,” Cushing said. “But we have to do a good job of not allowing that guy to beat us single-handedly.”

A committee of Eastern defensive backs made up of Page, Mark Williams and JJ Ross will likely see Pearson throughout the game, depending on which side of the field he lines up on.

“(Pearson’s) ability to adjust to the ball when it’s in the air, he is good at stacking, so we have been practicing on playing to that so he won’t be able to catch it,” Page said.