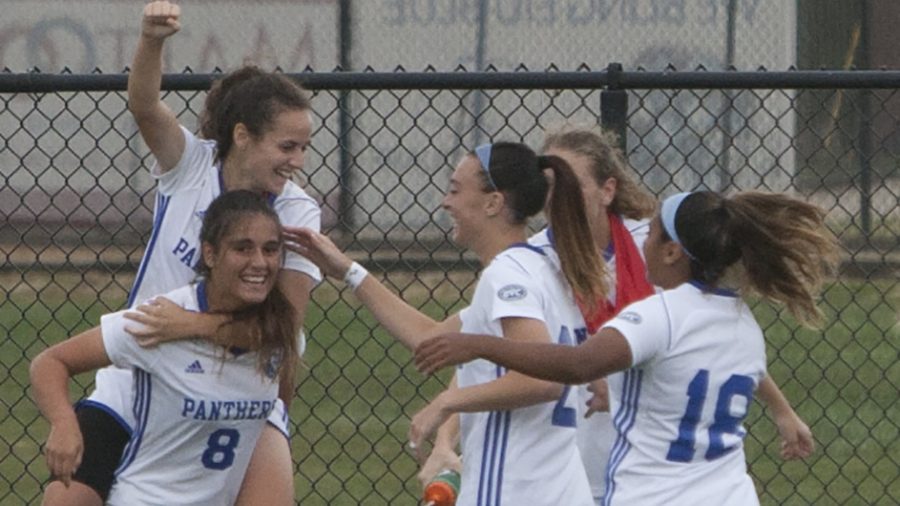 Dillan Schorfheide | The Daily Eastern News Pilar Barrio piggybacks a teammate, as other teammates run toward her, after she scored Eastern’s second goal of its match Sunday. Eastern went on to defeat Morehead State 3-0 at Lakeside Field.

A six-goal weekend for the Eastern women’s soccer team was a huge turnaround after four straight matches without a score, and there is no reason this kind of production cannot continue moving forward.

Head coach Jake Plant said for weeks the method behind the offense has been sound, but it just has not showed up on the scoreboard.

The two wins against Jacksonville State and Morehead State, respectively, proved him right, at least temporarily.

Junior forward Pilar Barrio, who recorded a goal and two assists on the weekend, happens to agree.

“I would say that we were being dominant, but we were losing, and that can be frustrating,” she said “But we know what our goals are for the season, so coming into the week, the whole team knew that we didn’t have time to be frustrated.”

After Sunday’s game, Plant said the team’s focus and patience is what helped give the spark to the offense, and that is a story that Eastern might be familiar with.

Last season, at the start of OVC play, the Panthers boasted just one win in non-conference action, coming against Chicago State, before fighting to a 4-3-3 record in the conference to secure a three-seed in the postseason.

This season, at the start of OVC play, the Panthers boasted just one win in non-conference action against Chicago State before…well, that is yet to be seen.

Finishing scoring chances is all Eastern needed to get back in to the win column after the slow stretch, and senior forward Sarah DeWolf, who posted a goal and an assist across the two matches, said that she knew she could lean on her team.

“We all worked hard and pushed each other this week, and it really paid off,” DeWolf said. “I also just reminded myself this is my last year and just to go there and have fun playing the sport I love with this great group of girls.”

It always helps to have a strong defensive presence, too, and Eastern has seen no shortage of strong play from senior Lindsey Carlson, who also scored the first goal of her college career against Jacksonville State, to junior Victoria Wharton and senior Rachel Pappas.

The Panthers have not allowed more than one goal in a game in over a month, and that is also thanks, in large part, to senior Sara Teteak who leads the OVC in saves per game in conference play.

Considering what the team was able to accomplish last year under similar circumstances with a familiar roster and the same type of momentum, Eastern may continue to make a push for a top seed in the OVC tournament yet again.