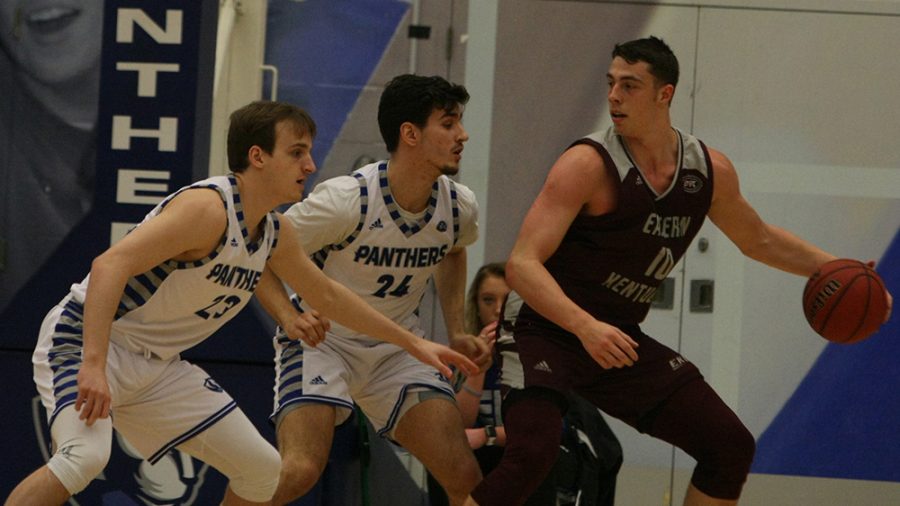 While the offense could certainly be up-and-down at times last season, the Eastern men’s basketball team could usually rely on a basket to help its case.

What the Panthers could not rely on, though, was their defense.

Until the second half of the season, Eastern struggled to keep opposing teams out of the lane and from shooting well beyond the three-point line.

These two aspects of defense will be important to watch once the season gets going.

Eastern ranked seventh in the conference last season for scoring defense, giving up 76.8 points per game, according to the OVC website.

With that number, compared to Eastern’s 71.8 points per game, the Panthers were at a scoring deficit of five points.

For most of the season, the Panthers ran a man-to-man defense.

The issue the team encountered was that opposing teams scorched the Panthers on the outside.

Opposing guards were able to dribble around perimeter Eastern defenders well, which led to them either getting points in the paint or kicking the ball out to perimeter shooters.

Keeping ball handlers in front of them was an issue head coach Jay Spoonhour mentioned at the beginning of the season for his team.

Spoonhour pointed out that his team had that issue in a scrimmage before last season started.

This offseason, the team has been working on its man defense, according to forward Rade Kukobat.

“We’ve realized that we cannot give up as many threes as we did last year and we’ve been grinding a lot on the defensive end,” he said. “It’s a man defense but the effort we are putting is a lot harder and we are going to make it miserable for people.”

In the second half of the season, Spoonhour implemented a hybrid zone/man-to-man defense that saw more success.

Whether or not the Panthers utilize this hybrid defense or not to start the season will be a big thing to watch for.

Going along with the hybrid defense, not allowing threes, like Kukobat said, will be important for Eastern to help cut down its scoring deficit.

The one game where this problem was most apparent was Eastern’s 104-60 loss to Fort Wayne Nov. 28.

The Mastodons lit up Eastern from beyond the three-point line, shooting 21-of-37 from three-point range.

Fort Wayne did it by making Eastern’s defenders run all over the half court, never being able to get set in front of the Mastodon ball handlers.

A Fort Wayne guard would drive past an Eastern defender, and when a Panther moved over for help in the lane, the guard kicked the ball out to the awaiting perimeter shooter, who made the shot with little contention.

Eastern’s defenders, in that game, were running all over the place either trying to help on a drive or trying to catch up with the ball handler, and they paid the price.

Help defense is fine and necessary, but Eastern never quite found a way to help without over helping, or help without leaving open shooters.

Everything will start with the perimeter defenders not getting beat to the lane, and with the defense rotating in the proper manner to cover all possible scoring lanes after the initial help defender leaves his spot.

That was one of the big reasons the help defense failed Eastern and left people open: The defender who got beat off the dribble would not recover to his teammates’ now open man.

If that initial Eastern defender did recover to his teammates’ man, somewhere else another opponent would get open, and Eastern did not recover well to cover him, which lead to the scoring chances for opponents.

Sometimes Eastern had two or even three guys move to provide help defense, which would leave multiple players open for chances to score or further move the ball.

No matter which case it is, Eastern found itself in a mess in help defense, and it showed.

The offense has some things to improve upon this year, but the defense is the thing that demands the biggest improvements going in to this season.